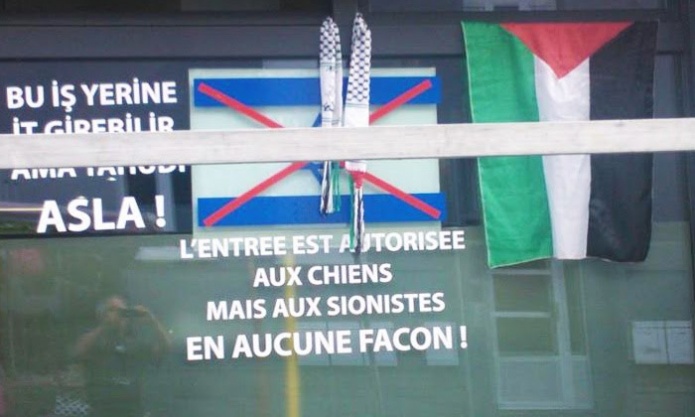 All over the world, displays of anti-Semitism and hatred against Jews continue to segregate them from the community, from pro-Palestinians in France attempting to attack suburban synagogues, to a swastika being spray painted on a Thornhill, Ontario bus stop.

In Belgium, where just a few months ago in Brussels a gunman went on a shooting spree at a Jewish museum killing four, another illicit demonstration of hatred has taken place, as a café hung up a sign that read “No Jews Allowed.”

JTA reports that a Belgian watchdog, the Belgian League Against Anti-Semitism, or LBCA, has filed a complaint to the mayor after discovering the sign at the Saint-Nicolas café, located in a suburb just east of Liege, and to bring those parties responsible to justice.

The suspects reportedly hung a sign written in Turkish and French that reads “Dogs are allowed in this establishment but Jews are not under any circumstances.”

The French text, in this scenario, replaces the words “Jews” with “Zionists,” yet another indication of the blurred line between anti-Semitism and anti-Zionism.

After filing the complaint, the major sent police to investigate at the cafe, who have since removed the sign and confirmed the LBCA report. The window display also included a Palestinian flag, an Israeli flag crossed out with a red “X” sign, and a kaffieh, or Palestinian shawl, draped around it.
The incident comes only a day after three European Foreign Affairs ministers condemned the wave of anti-Semitism that’s been taking place across Europe as Israel’s war against Hamas terrorists rages on. While in the West we’ve been affected mostly on social media (save for some unfortunate instances), for European Jews it’s been a truly frightening ordeal.