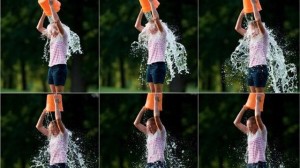 The charity stunt has lured athletes, celebrities, politicians and rock stars and gone viral on the Internet, but don’t look for U.S. diplomats to get in on the fun.

Lawyers at the State Department have banned American ambassadors and other high-profile foreign service officers from participating in the ice-bucket challenge to raise money and awareness for Lou Gehrig’s disease, also called amyotrophic lateral sclerosis, or ALS. In a cable sent this week to all U.S. diplomatic missions, the lawyers say it runs afoul of federal ethics rules barring officials from using public office for private gain “no matter how worthy the cause.” The unclassified cable, sent on Tuesday, was obtained by The Associated Press Thursday.

The cable said public health and disease prevention are some of the State Department’s highest priorities, noting U.S. funding for global programs to fight HIV and AIDS, malaria, tuberculosis, smallpox and polio and recent efforts to combat the Ebola virus. And, it complimented the ALS Association on the success of its ice bucket challenge, which has raised more than $40 million and attracted a plethora of notable participants, including former President George W. Bush, television hosts Martha Stewart and Matt Lauer and pro golfer Greg Norman.

But it also pointed out that choosing among worthy charities can be a difficult personal decision that is made “even more difficult when high-ranking State Department personnel with high-profile positions are asked to participate in charitable fund-raising, and concerns about preference and favoritism always arise.”

“There are firmly established rules preventing the use of public office, such as our ambassadors, for private gain, no matter how worthy a cause,” the cable said. “Thus, high-ranking State Department officials are unfortunately unable to participate in the ice bucket challenge. We since wish the ALS Association continued success in its ice bucket campaign, and in its fight against Lou Gehrig’s disease.”

By the time the cable was sent at least one high-ranking diplomat, Ambassador to Israel Daniel Shapiro, had already participated and had challenged U.S. Ambassador to the United Nations Samantha Power to douse herself with ice water for the cause. But by then, Power and the other ambassadors got the memo.