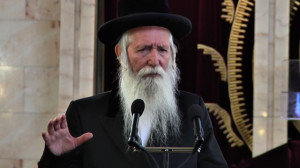 During the event Rav Grossman approached Stern and explained “If you wish to enter the Yom HaDin as one should you must ask forgiveness from Rabbi Shmuel Eliyahu”. At first Stern declined the office with the explanation that he already apologized. Rabbi Grossman however remained firm, explaining this must be done face to face.

Stern agreed to comply at Rabbi Grossman’s insistence and he approached Rav Eliyahu and apologized. “I respect the rav and apologize before you” he is quoted saying. “I would like to begin a new page” he added. Rav Eliyahu accepted the apology “with a full heart” as he put it, and the three took a photo together.

Rav Grossman said he was happy that Stern decided to enter the holy days as one should. “MK Stern has many merits for protecting Eretz HaKodesh” stated Rav Grossman, “and as such it is only natural that he would wish to correct a compromise regarding kovod for rabbonim” he concluded.