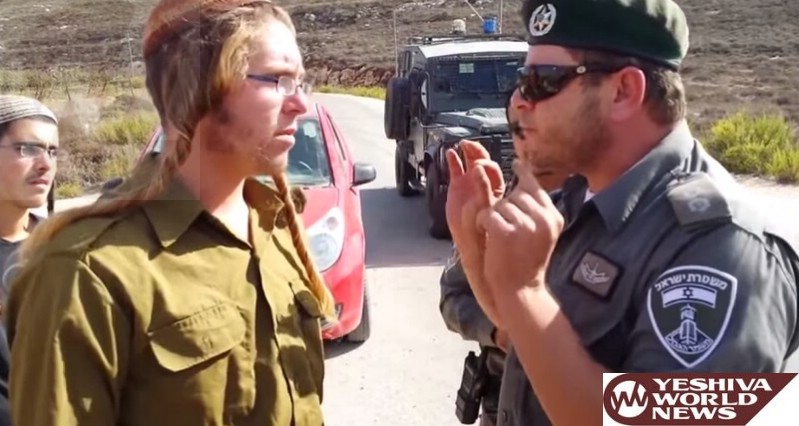 In April of 2014 IDF and border police forces took over the Ohd Yosef Chai Yeshiva in Yitzhar and turned it into a border police base. On Wednesday, June 11, 2014 Yassam (Special Forces) police attempted to create a provocation in Yitzhar, apparently in order to raise a media storm that would facilitate extending the seizure of the yeshiva. The attempt failed, however Defense Minister Moshe Ya’alon extended the seizure warrant by three months. The status has not changed since then and most recently last week a new order was issued leaving the yeshiva in the hands of the border police for 10 additional weeks, until November 2014.

Following the extension of the seizure warrant, Ariel Zilber, a soldier and Yitzhar resident, was filmed on Wednesday, September 17 calling on border policemen to refuse orders and leave the Ohd Yosef Chai Yeshiva. Several hours after the video clip was publicized, Zilber was detained at the Ben-Gurion Airport as he was on his way to Uman for Rosh Hashanah. Zilber was taken for interrogation to the offices of the Criminal Investigation Division (CID) of the IDF. He was given a warning by an agent from the Jewish Department of the ISA and interrogated on suspicion of committing “the crime of vandalism”.

Honenu is assisting the soldier and has taken note of the difference in the treatment of a soldier from Yitzhar and the left-wing soldiers from Unit 8200, an Israeli Intelligence Corps Unit, who recently raised a media storm by calling on soldiers to refuse orders. “If only the system’s treatment of the [soldiers in Unit] 8200 was as efficient,” noted Honenu.

“Against the Unit 8200 soldiers, who hold military secrets and classified information critical to the security of the State and are calling for refusing orders, they aren’t doing a thing. Concurrently they decisively acted and detained a soldier from Yitzhar within several hours after a video clip of him was publicized by the communications media. We hope that the soldier will be quickly released and able to celebrate Rosh Hashanah at his home,” added Kedar.