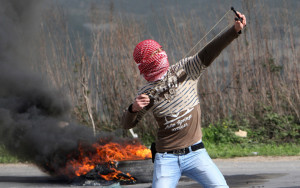 Once again an Israeli motorist was involved in a crash as a result of Arabs throwing rocks at motorists.

A 42-year-old driver was injured on Monday afternoon 23 Kislev when his vehicle was rocked and he lost control, smashing into a wall near Tapuach Junction on Route 60 in Shomron.

Magen David Adom paramedics responded and the injured man was treated on the scene and transported to Beilinson Hospital in Petach Tikvah. The condition of the driver is not known at the time of this report.