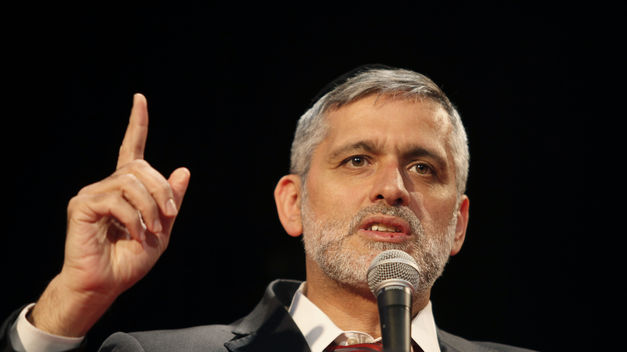 Despite denials from the Ichud Leumi party, MK Eli Yishai on Tuesday morning 24 Kislev told Kalman Lipskind on Galei Yisrael Radio that he is negotiating with Ichud Leumi. He added that MK Yoni Chetboun is with him as well.

Ichud Leumi officials reported that for as long as Minister Uri Ariel is in negotiations with Bayit Yehudi the party would not negotiate with other parties. After Yishai’s report of ongoing talks, Ichud Leumi officials confirmed the reported negotiations with Yishai, adding Ariel and Bayit Yehudi are close agreement and they must wait to see if they sign an agreement before moving ahead with Yishai.

When asked if he would permit women such as MK Orit Struk on the list, Yishai stated that he is not disqualifying anything positive at present but as in the past, the decision would be based on Daas Torah.

Galei Yisrael then asked about the diplomatic process between Israel and the PA (Palestinian Authority).

Yishai stated “To my sorrow, a Palestinian state already exists and there is a leader and cabinet ministers. There are not major differences between them and Hamas. We must remain strong. We must be united as Am Yisrael wants peace”.

Yishai also spoke with Kol Berama Radio, telling Mordechai Lavi “I am not afraid for I am following my path as I have always done and I am backed by HaGaon Rav Meir Mazuz Shlita, who told me to run and take it to the end”.