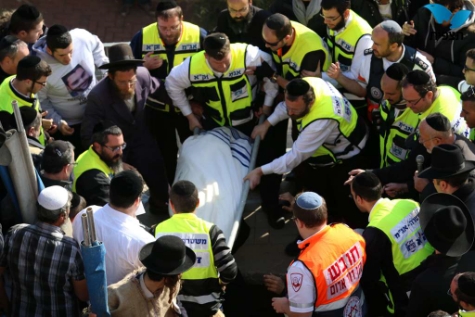 The following hesped was delivered during the levaya for the Paris kedoshim, in Yerushalayim, on Tuesday, 22 Teves 5775 by President Reuven Rivlin.

At moments such as these, I stand before you, brokenhearted, shaken and in pain, and with me stands an entire nation.

Phillipe, you wanted to shop for the Sabbath, and what is more Jewish than preparing, shopping on a Friday, for the holy Sabbath day.

Francois-Michel, the apartment that you bought here in Israel, was ready for your arrival. You so wanted to make Aliyah (immigrate to Israel), to live here with us. But you will never now be able to affix a mezuzah upon the doorpost of your home in Israel. “What man is there, who has built a new house and has not yet inaugurated it? Let him go and return to his house, lest he die in battle,” as it is written in the Torah. But for you, the war came to you, and the murderer’s hand destroyed everything.

Yoav, you were here, just two weeks ago in Jerusalem, for the first time. You stood at the Western Wall, you were photographed wrapped in the Israeli flag. Today, you are here for the second, and the final time. As a Jewish hero, at one with us.

Yohan, you could have got away, escaped, you could have run – but you did not surrender. You fought with the murderer, to save the life a three year old boy. You succeeded in that, but paid with your life. Just twenty years old, and already a hero.

Dear families, people of Israel. Philippe Braham, Yoav Hattab, Yohan Cohen and Francois-Michel Saada, were murdered on the eve of the Sabbath, in a kosher supermarket in Paris, in cold blood, because they were Jewish. The murderer made sure to be in a Jewish shop, and only then did he carry out the massacre. This was pure, venomous evil, which stirs the very worst of memories. This is sheer hatred of Jews; abhorrent, dark and premeditated, which seeks to strike, wherever there is Jewish life. In Paris, in Jerusalem, in Toulouse, and in Tel Aviv. In Brussels, and in Mumbai. In the streets, and in the synagogues. In the schools, and in the local market. In the train stations, and in the museums.

Like many, I watched the millions who marched in the streets of France. It was a demonstration of deep solidarity which warmed my heart. While the last weeks and months have proven, that terror does not discriminate between blood, we cannot escape the fact that this terrorism, explicitly targets the Jewish people. Those wearing tzitzis, those wearing kippot, those eating kosher food, praying in synagogues, ‘students of the Torah’.

It would be dangerous to deny that we are talking about anti-Semitism, whether old or new. Regardless of what may be the sick motives of terrorists, it is beholden upon the leaders of Europe to act, and commit to firm measures to return a sense of security and safety to the Jews of Europe; in Toulouse, in Paris, in Brussels, or in Burgas.

We cannot allow it to be the case, that in the year 2015, seventy years since the end of the Second World War, Jews are afraid to walk in the streets of Europe with a yarmulke and tzitzis. It cannot be allowed, that we should see in the news, frequent vandalism of Jewish cemeteries, of Jews being beaten, and of synagogues and communities under attack. It is no longer possible to ignore or remain ambiguous, or to act weakly or with leniency against the rabid anti-Semitic incitement. Ignorance and violence will not simply go away on their own.

My brothers and sisters, members of the French Jewish community, we have in recent years witnessed a strengthening and a tightening of the vibrant and strong connection between the Jewish community of France, and the State and citizens of Israel. This strong and close bond finds expression in times of joy and grief, in good times and in bad.

We stood here together, and accompanied on their final journey, Miriam Monsonego, Rabbi Yonatan Sandler, and his infant children, Gavriel and Ariyeh. And just last summer, the people of Israel stood as one, as they laid to rest Jordan Ben-Simon, a ‘lone soldier’ from France. I met his parents, and his sisters. Special people, a family committed to a love for Israel, Jewish tradition, and a love for the State of Israel.

At these difficult times, I have learned how much we truly are one people. I understand how important it is that we stay together, close together, regardless of geographical distance. And today too, we are brothers, members of one family, with heads bowed, with tears of sorrow. A bond which cannot be unraveled by time or distance. A bond of spirit and blood.

Much has been said since the murders, on the issue of the immigration to Israel of French Jewry. My dear brothers and sisters, Jewish citizens of France, you are welcome. Our land is your land, our home is your home, and we yearn to see you settle in Zion.

However, returning to your ancestral home need not be due to distress, out of desperation, because of destruction, or in the throes of terror and fear. Terror has never kept us down, and we do not want terror to subdue you. The Land of Israel is the land of choice. We want you to choose Israel, because of a love for Israel.