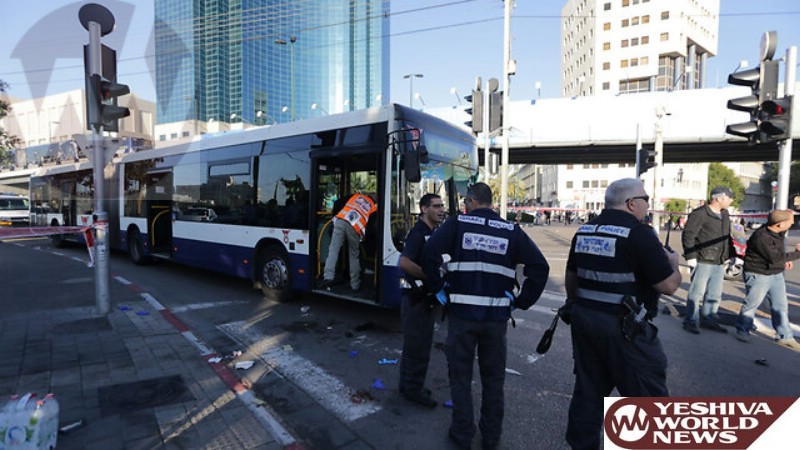 The first calls that were received by the Magen David Adom dispatcher came from passengers on board the number 40 bus at about 7:17AM. The bus, which originated in Bat Yam, was traveling towards N. Tel Aviv. The lone terrorist, 23-year-old Tulkarem resident Hamza Mohammed Hassan Matrouk boarded the bus at the old central bus station. “An Arab man stabbed me in the head” one caller shouted. “There has been a pigua. Many people are injured. Bring help fast” shouted another. “Send ambulances immediately! To HaMasger Street” shouted another caller, adding “The attacker fled and the police are chasing after him”.

Police quickly realized the attacker was inside “Israel proper” without authorization. His goal was clearly to wound and kill as many people as possible. The bus veered out of control after the wounded driver tried to fight off the attacker. The attacker used the opportunity to flee. An Israel Prison Authority Nachshon Unit vehicle happened to pass by and saw something was taking place. Officers got out and began chasing the attacker, who was shot in a leg and taken into custody. The Nachshon unit transports prisoners to and from court. The vehicle was enroute to a Tel Aviv courthouse when the officers saw the terrorist fleeing.

The wounded were transported to Ichilov and Tel Hashomer Hospitals. At least 19 people were wounded, with six listed in serious condition during the hours following the attack. Five others were moderate and the remainder light. Some of the injuries include patients treated for hysteria and bruises from the bus veering out of control. Magen David Adom at 10AM reported 80 units of blood were already used to treat the wounded. The terrorist was transported to Wolfson Hospital in Holon where he remains under arrest.

Doctors reported some difficult injuries due to the length of the knife used. Minister of Public Security Yitzchak Aharonovich told the press the terrorist appears to have acted alone and these types of attacks are close to impossible to prevent. Tel Aviv Police Chief Bentzi Sau concurred, as did Israel Police Chief Yochanan Danino. Following the attack Israel Police heightened operational alert status nationwide.

Eighth grader Lial Sussia explained “suddenly the terrorist appeared and began stabbing people on the bus, the Dan Company number 40. We ran to the rear. I was sitting and I heard shouting. He ran through the bus and then ran to the driver and stabbed him. He shouted things but I did not really hear what he said. He headed to me. I smashed the window and jumped out but not before I threw my backpack at him.

Speaking to interrogators, the terrorist reported explained he carried out the attack due to Operation Protective Edge, events on Har Habayis and his desire to earn a portion in the world to come”.