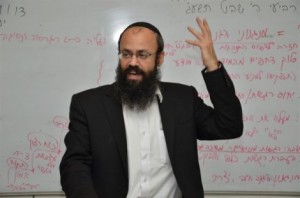 It would appear the ultimatum given to Yachad party leader Eli Yishai by Yoni Chetboun will result in Chetboun leaving the party. With hours remaining before the deadline for submitting lists, it appears veteran Hebron resident and community leader Rabbi Hillel Horowitz will replace Chetboun as Eli Yishai remains determined to close a deal with the Otzma Yehudit party.

Chetboun objects to the deal with Dr. Michael Ben-Ari and Baruch Marzel of Otzma Yehudit and gave his ultimatum on Thursday, 9 Shevat. It appears that Yishai feels the additional votes from Ben-Ari’s party are too important towards passing the minimum threshold to enter Knesset in the race. Rabbi Horowitz was an IDF rav and he is also a son-in-law of Rabbi Zalman Melamed Shlita, a prominent dati leumi community posek and rosh yeshiva.