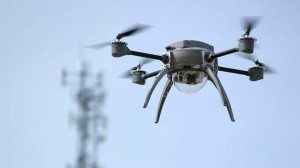 Unidentified drones flew over the Eiffel Tower and key Paris landmarks for a second night running, further baffling French authorities who are investigating the mysterious phenomenon at a time of high security across the country.

Police sighted one or more drones in five instances buzzing in the Paris sky in the night of Tuesday to Wednesday — from 11.30 p.m. to 2 a.m. An inquiry was launched after drones, which are banned over Paris, were spotted Monday night.

Paris prosecutors’ spokeswoman Agnes Thibault-Lecuivre says an unidentified flying object was first seen near the Gare de l’Est train station Tuesday night, with sightings continuing over the Paris Opera, then on to the Tuileries gardens, past the Eiffel Tower and then south past Paris’ Montparnasse Tower.