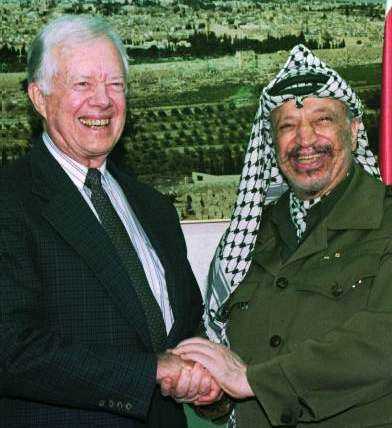 Former US President Jimmy Carter, who maintained good ties with Yasser Arafat and his allies YM”S has been labeled persona non grata in Israel by President Reuven Rivlin and Prime Minister Binyamin Netanyahu.

Despite being shunned by Israel’s leaders, Carter was scheduled to visit with his allies in Gaza, terrorist leaders of the Hamas regime. Mr. Carter was expected in Gaza on Thursday, 11 Iyar – but for reasons unknown his visit was cancelled at the last minute.

He was scheduled  to enter Gaza via the Erez Crossing for the meeting with Hamas Prime Minster Ismail Haniyeh. Carter is particularly concerned with the lack of unity between terrorist factions, Haniyeh’s Hamas and PA (Palestinian Authority) Chairman Abu Mazen’s Fatah faction.

Carter, known for his anti-Israel policies, also met with Saudi Arabian officials during his visit to the region. The self-proclaimed peace-maker during his tenure in the White House and after his retirement has been a staunch advocate for the establishment of a PA state and does not hide his anti-Israel position.