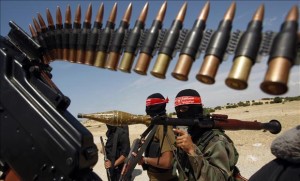 Hamas officials in Gaza support and permit the continued religious persecution of anyone and everyone that does not subscribe to its form of religious belief. This includes the Gazans who identify as Sunni-affiliated Salafist group. They are imprisoned and tortured in prison in Gaza and now, there mosques have been destroyed.

The PA (Palestinian Authority) Ma’an News Agency reported that Salafist officials over her the weekend issued a threat to Hamas, demanding the release of its members whom are imprisoned or suffer the consequences.

The Salafist faction is allied with the PA (Palestinian Authority) faction in Ramallah as the latter feels the former is another partner in unseating Hamas from its control over Gaza.