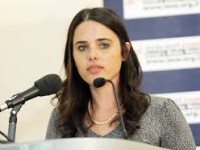 It is now being reported that the path to Bayit Yehudi’s inclusion in the coalition has been cleared off a big stumbling block as Prime Minister Binyamin Netanyahu has agreed to give control of the Justice Ministry to Bayit Yehudi and has lifted objections to Ayelet Shaked serving in the post.

To many this seems to have removed the major obstacle for Bennett and a signature on a coalition agreement may be expected before the deadline expires today, Wednesday 17 Iyar at midnight.

However there is trouble in-house, as officials from the Ichud Leumi faction of Bayit Yehudi headed by Uri Ariel have stated if Ariel does not receive the second senior slot as per their agreement, the faction will withdraw from the party.