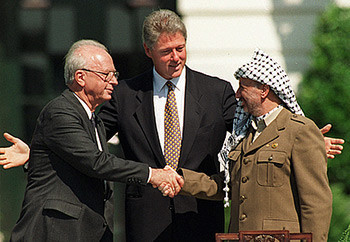 As Prime Minister Binyamin Netanyahu just got over the stress of forming a coalition government he now has to deal with some of his party’s faction members who are strong in their ideology of a Greater Israel. Among them is newly-elected MK Miki Zohar, who announced the government must eliminate the Oslo Agreements that were signed with the PA (Palestinian Authority) in 1993. Zohar made his comments during a visit to northern Shomron yishuvim. “Anyone who voted Likud did so with the desire to preserve the Greater Eretz Yisrael and therefore, I think we must call on the prime minister to renew and strengthen building in Yehuda and Shomron” Zohar told the press.

He added “The Oslo Agreements have exhausted themselves and it must be explained to all relevant international bodies that they no longer exist for us”. Acting head of the Shomron Regional Council Danny Dayan adding “continued construction in Yehuda and Shomron must be at the heart of the new government’s work”.

“Together with the Land of Israel Faithful during this term we demand the prime minister order a building boom. Not talk but action. One who truly wishes to prevent a Palestinian state must build in the Shomron for at the end this is what will be the determining factor. We will not give in during this term regarding the legitimate justified demand for building in a big way in line with the size of the available areas”.

Zohar concluded “I have a real feeling that in this term we will be permitted to settle Yehuda and Shomron and to cancel the hallucinatory Oslo Agreements and act for Eretz Yisrael and Toras Yisrael, one simple action; increasing the number of Jews in areas throughout Yehuda and Shomron which are most important to us as a Jewish democratic state”.