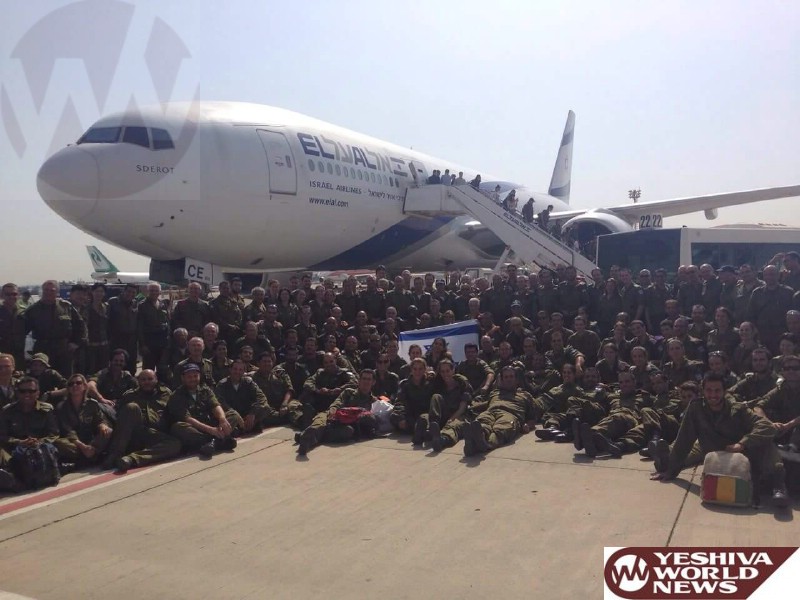 Ironically, as news of another major earthquake in Nepal breaks, a ceremony attended by Prime Minister Binyamin Netanyahu was held to welcome home the team that responded to the earthquake in that country a number of weeks ago. The delegation included search & rescue personnel, medical personnel and the support staff that were part of setting up and operating the field hospital and carrying out rescue operations in that country.

PM Netanyahu during the ceremony stated, “Israel is a small country with a big heart. UN data show that we sent the second largest delegation to Nepal, in the number of personnel, of all countries.

“Members of the delegation – we are proud of you!

“You rescued people from the ruins, treated 1,600 injured and sick people, and brought new life into the world, at least eight births. You showed the true face of the State of Israel – a state that loves life and saves life.

“Did anyone see the Iranian delegation in Nepal? The Iranians send delegations to countries in the region and around the world not to save lives, but to sow death, ruin and terror, and this is the difference between enlightened democracies and dark regimes based on fanaticism and terror.

“My friend, Indian Prime Minister Narendra Modi, told me a few days ago that cooperation between Israel and India in Nepal is an example of brotherhood between peoples and indeed there is justice in his words.

“Soldiers and officers, members of the delegation, you moved the entire Israeli people as you went to the most remote places to save Israeli citizens, Nepalese citizens and citizens of the world. I especially remember your pictures as you stopped to light Shabbat candles in the field hospital.

“We all remember the brave soldier Or Asraf. I promised his parents, Patrick and Orit, that every effort would be made to bring him home. How sad it was that we could not bring him back alive. Even his comrades in arms who fought with him in Operation Protective Edge joined in the effort to bring him back and indeed, as the Chief-of-Staff and the Defense Minister said, they showed the mutual responsibility for which our people and the IDF are known.

“Dear members of the delegation, you brought much honor and much pride to the State of Israel. I am certain and I know that you are already prepared for the next mission wherever you are needed; according to the news such a mission is already at hand. A few minutes ago I told the Nepalese Ambassador that we are prepared to the best of our abilities to help them even now. Would that you are not needed, but should it be necessary you know – and the world is learning – that you can be counted on.

“On behalf of the citizens of Israel, I salute you.”