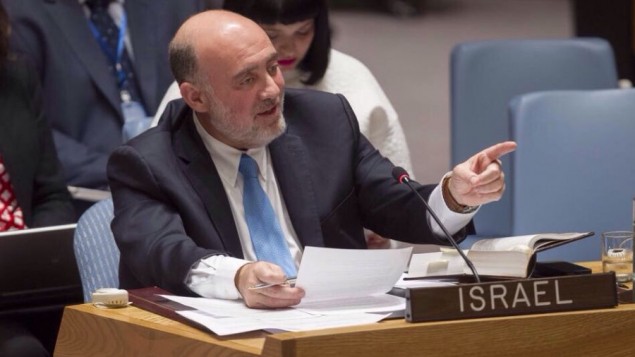 Israeli Ambassador to the United Nations Ron Prosor, following the fatal shooting of Malachi Rosenfeld HY”D on 12 Tammuz near Shilo on the Alon road, sent the following letter to the UN Secretary General and the Security Council:

“I write to you for the second time in less than two weeks to​ inform you that yet another citizen of Israel has been brutally murdered by Palestinian terrorists. Malachi Moshe Rosenfeld, age 26, was shot and killed while driving home from playing basketball with his friends, who were also severely injured in the attack, and remain hospitalized. Malachi had taken responsibility for taking care of his family after his older brother died in a tragic accident 13 years ago. This cruel murder is an unbearable tragedy for his family and his community.

“In the two weeks since the beginning of Ramadan, even as Israel has taken steps to facilitate holiday celebrations, there has been a dramatic increase in attacks against Israelis. Each day seems to bring with it news of a shooting attack, or a stabbing. Just yesterday, a terrorist stabbed a 19-year old female soldier next to Rachel’s Tomb, causing severe injuries. These attacks are a direct result of incitement by the Palestinian Authority in the media and in its education system. Even after this latest incident, the leadership of the PA remains silent, failing to condemn the murder of innocent people.

“These attacks are part of a global surge of terrorism. We have all been witness to the horrific terror attacks of last week in France, Tunisia, and Kuwait, which you condemned ‘in the strongest terms’. We join in your call that ‘those responsible for these appalling acts of violence must be swiftly brought to justice’ and that ‘these heinous attacks will only strengthen the commitment of the United Nations to help defeat those bent on murder, destruction and the annihilation of human development and culture’.

I expect you to condemn the terrorist attacks in Israel in an equally decisive manner. Terror is terror, no matter where it takes place, or who is harmed. The people of Israel deserve the same level of concern and empathy as any other people in the world.”