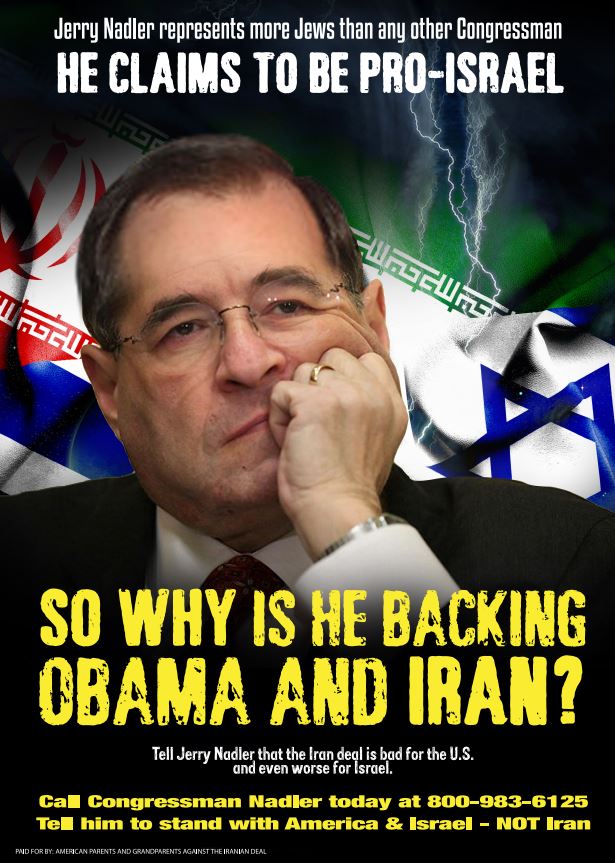 If you read a Jewish newspaper this weekend you are likely to see an ad slamming Congressman Jerry Nadler for his support of the Iran deal. The ad plainly states: “Jerry Nadler represents more Jews than any other Congressman. He claims to be Pro-Israel. So why is he backing Obama and Iran?” The ad calls on voters to call Congressman Nadler at (800) 733 5417 and “tell him to stand with Israel – NOT Iran.”

Congressman Nadler set of a fire-storm last week when he became the first Congressman from New York to announce his support for President Obama’s deal with Iran. Nadler’s decision to support the Iran deal was especially surprising considering Senator Chuck Schumer’s strong public opposition to the Iran deal just a few days earlier. Nadler was roundly condemned by Jewish leaders including those that represent his Brooklyn district: Assemblyman Dov Hikind, Councilman David Greenfield and Senator Simcha Felder. Hikind promised that the community would run a candidate against Nadler and spend millions to defeat him. Greenfield criticized Nadler for lying to the community when he told community leaders days before his announcement that he was undecided. Felder is headlining a rally against Nadler with holocaust survivors later today in front of Nadler’s office.

The decision by Nadler to support the Iran deal has opened a rift between Nadler and Brooklyn’s Jewish community which generally feels ignored by Nadler’s Upper West Side politics. However, the community traditionally supported Nadler based on his pro-Israel record. Nadler’s support for the Iran deal was an especially big blow for opponents of the deal because it provides political cover for non-Jews to vote in favor of the Iran deal. These critical ads are likely to be the first of a long campaign of disenfranchisement with Congressman Jerry Nadler within his traditional base of support in the Jewish community.