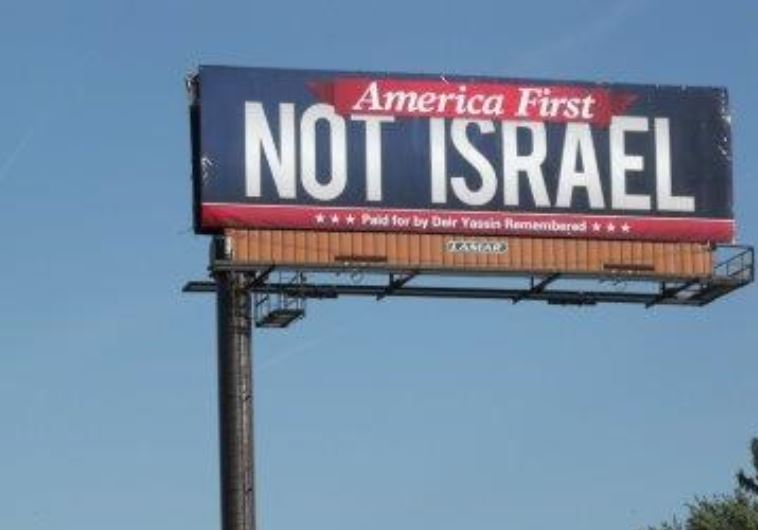 Deir Yassin Remembered, a New York based Pro-Palestinian organization, paid for a large billboard on Detroit’s 8 Mile Road that reads “America First Not Israel” that is stirring controversy.

The sign has garnered criticism from those who call it anti-Semitic. The organization has posted similar signs throughout the country. The sign was placed in an area that is not predominantly Jewish or Arab despite the large communities of both that populate the metro-Detroit area.

The Anti-Defamation League’s Heidi Budaj told Detroit’s WXYZ Fox News affiliate that the location of the ad is an attempt to “drive a wedge between the American people and the state of Israel.”

“This particular sign goes a step further and raises an old anti-Semitic canard of dual loyalty, implying that Jews are not loyal to the country in which they live,” Budaj said. “Make no mistake that while many of the Jewish people in the United States support the state of Israel as a Jewish state, we are loyal Americans.”

The website of Deir Yassin Remembered, Inc. lists its mailing address dually under the name of Daniel A. McGowan, who is professor emeritus of economics at Hobart and William Smith Colleges.

Deir Yassin, a village on the western outskirts of Jerusalem, was the site of one of the most controversial battles in the War of Independence in April 1948, just a month shy of the declaration of the State of Israel. Allegations have been made against units of the Etzel (Irgun) and Lehi (Stern Group) undergrounds that they massacred dozens of Palestinian civilians in the village and forced the survivors to flee.