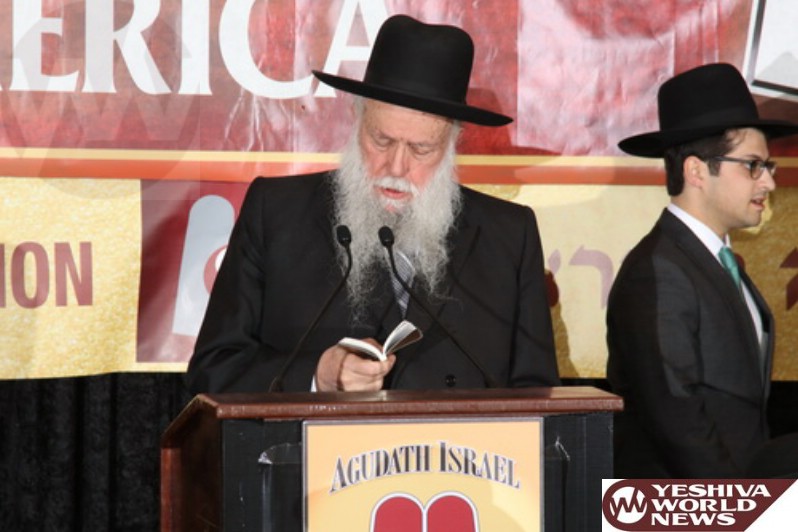 Following a beautiful, uplifting Shabbos, Motzoei Shabbos at the 93rd annual Agudath Israel of America convention combined inspiration and the tackling of difficult communal issues, under the banner of the convention’s theme of “Leadership.”

At 8:30 pm, the main hotel ballroom was once again full, for the Motzoei Shabbos Keynote Session. In addition to the overflow crowd in the Convention Hotel itself, many additional thousands followed the session electronically.The dais featured leading gedolim of our generation, including two special guests from Eretz Yisroel, HaRav Dov Yaffe, Mashgiach in Yeshiva Knesses Chizkiyahu; and the Sadigura Rebbe.

Convention Chairman Binyomin Berger spoke about Agudath Israel of America’s leadership on behalf of the needs of every individual in klal Yisroel, from cradle to grave. He praised the strong representation of young individuals at the convention, who are willing to roll up their sleeves on behalf of our community. “None of us are smarter than all us,” he exclaimed.

The Novominsker Rebbe, Rosh Agudas Yisroel and member of the Moetzes Gedolei HaTorah of America, was in Eretz Yisroel for a family simcha. The Rebbe delivered a special video message to the convention, highlighting both the physical and spiritual dangers our community faces, and once again stressed the dangers of the burgeoning “Open Orthodoxy” movement. “These are the chevlai moshiach,” the Rebbe exclaimed. “We must think and breathe emunah; think and breathe ahavas Torah and yiras shamayim; and think and breathe tzedaka v’chessed.” 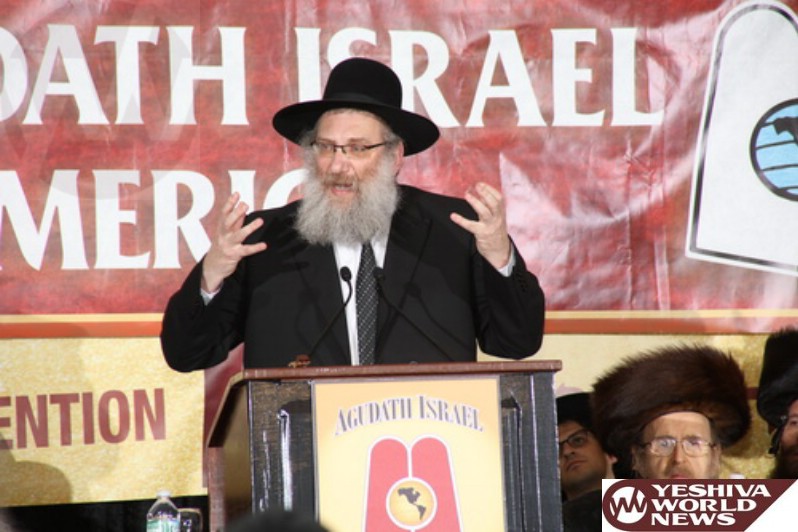 Shabbos was the yartzeit of HaRav Aharon Kotler zt”l, legendary Rosh Yeshiva of Bais Medrash Govoha of Lakewood. A grandson, Rabbi Uren Reich, Rosh HaYeshiva of Yeshiva of Woodlake Village, spoke about Rav Aharon’s leadership in building the American Torah world of today, and the inestimable impact that has on our entire society today. The Rosh HaYeshiva detailed the close relationship that Rav Aharon had with Agudas Yisroel, as well as the regard in which he held baalei batim who supported Torah. “Let’s be proud of our olam haTorah,” Rabbi Reich concluded. “It’s our world.” 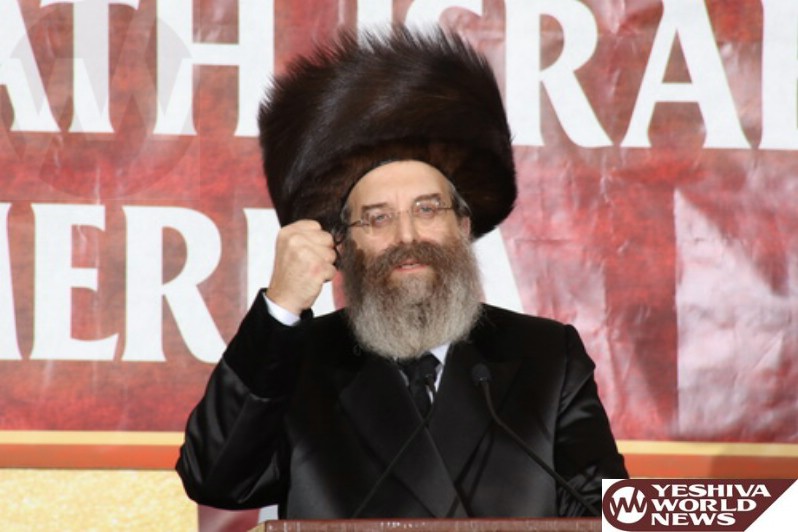 The Sadigura Rebbe began by giving his impressions of the Shabbos he spent at the convention, noting the amazing achdus between so many different factions of
klal Yisroel, and the powerful partnership between our community’s Yissocher and Zevulun, the lomdei Torah and marbitzei Torah, and the Torah supporters. The Rebbe stressed the importance for parents to inculcate in their children a love for Torah; the children should find learning enjoyable. He added the importance of explaining the
taamei hamitzvos, so that children should have a deep appreciation for what the Torah expects them to do. “That’s the way of our generation,” the Rebbe declared. 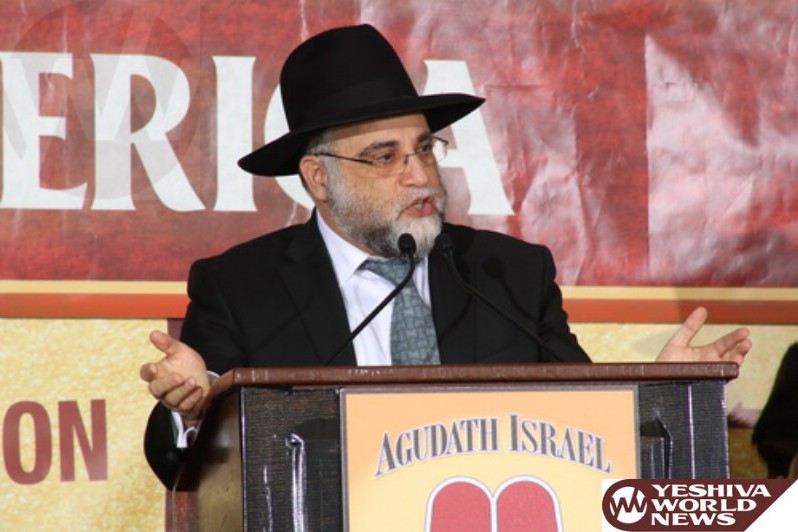 Rabbi Dovid Ozeri, Rav of Congregation Yad Yosef, followed, noting the significance that a Sephardic leader has been invited for such a significant role at the convention. Thunderous applause could be heard throughout Rabbi Ozeri’s passionate speech. He zeroed in on a chinuch issue that is often overlooked: the pay that rabbeim receive. Rabbi Ozeri discussed the importance of a rebbi’s job, and how so many rebbeim today don’t earn nearly enough to support their families. Increasingly, some successful rebbeim feel the need to leave chinuch. Rabbi Ozeri contended that the burden of increasing salaries cannot be placed upon struggling mosdos and parents, but rather upon baalei tzedaka who donate significant sums to various causes. “We either take care of our melamdim, or the next generation is in big trouble,” he warned.

Leading on Every Cause

“What does Agudah do for me?” is a frequently asked question. In a brief address, Rabbi Yosef Chaim Golding, Chief Operating Officer of Agudath Israel of America, explained how Agudath Israel’s advocacy on a range of major issues has an impact on the community as a whole and each individual yid. As an example, New York’s mosdos haTorah reaped approximately $165 million government funding over the past year alone, much of it thanks to Agudath Israel’s efforts. “This is your Agudas Yisroel,” he exclaimed.

A video presentation followed, with personal testimonials from four individuals depicting how various Agudath Israel programs helped them: building a successful yeshiva; advocating for proper healthcare for older or terminally ill patients; providing a CPA course that helped launch a successful career; and helping a special needs child be placed in a quality school. 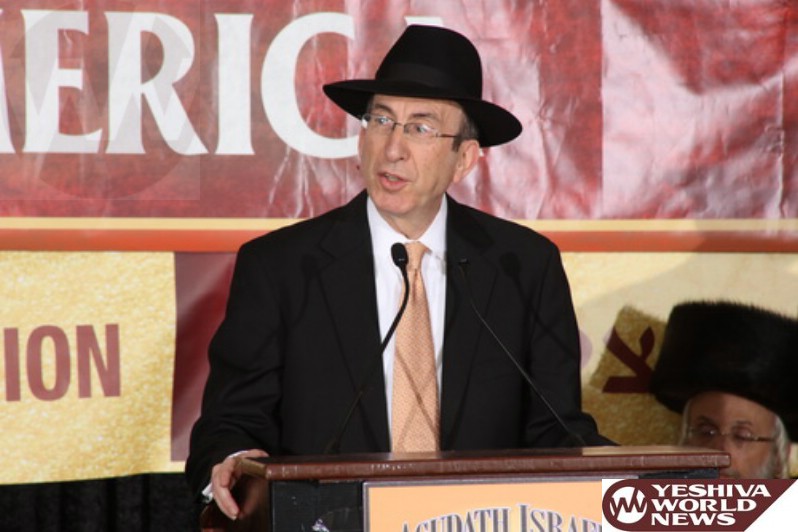 Rabbi Shlomo Gertzulin, Executive Vice President for Finance and Administration for Agudath Israel of America, noted that Agudath Israel’s increase in activism, in breadth and scope, requires increased funding as well. Rabbi Gertzulin stressed the need for the public, including those who cannot give large sums, to contribute towards Agudath Israel’s efforts on behalf of all of us. 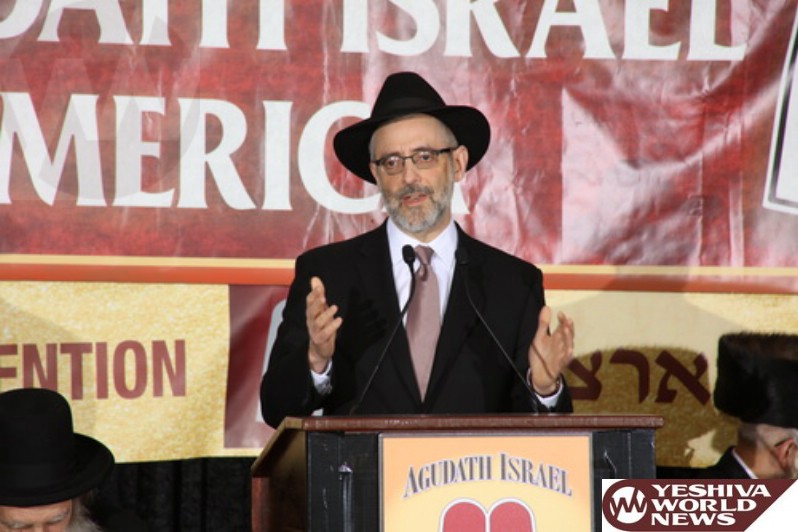 Rabbi Zwiebel then touched upon the painful topic of young people in our communities who abandon the ways of Torah. While noting that the reasons for this plague can never be definitively explained, there are many areas on which we can focus together as a community to help minimize this growing problem. Rabbi Zwiebel stressed that we must realize that the children who have abandoned our community are suffering too. This issue is scheduled to be focused upon in depth at the convention’s Sunday morning keynote session. “When an individual breaks the link fromhar Sinai, it is not just a tragedy for his family; it is a national tragedy,” Rabbi Zwiebel exclaimed.

Before the Keynote Session and After

Shabbos at the convention also featured a number of other events. Shortly after Havdala, the kol Torah at the hotel reverberated again. Pirchei Agudas Yisroel held an Avos U’banim program for the boys. Rabbi Shlomo Gottesman, editor of Yishurun, delivered a shiur on how modern technology affects Hilchos Shabbos. 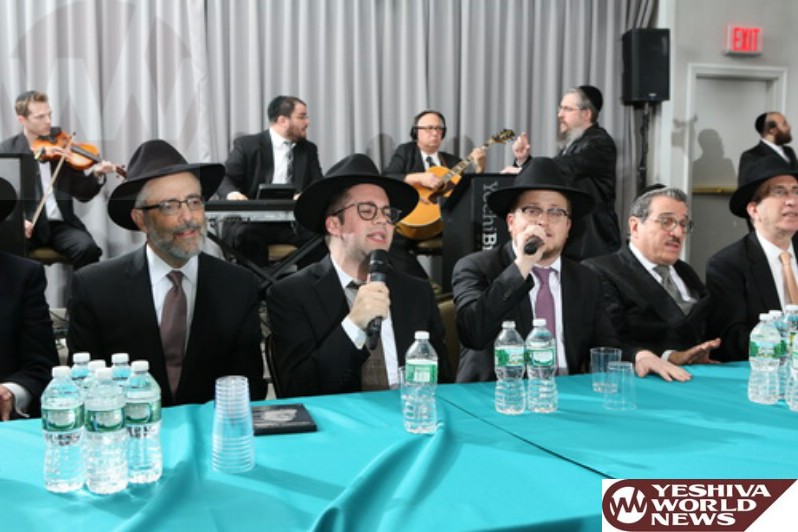 The keynote session was followed by a beautiful Melave Malka, and an inspirational post-Melave Malka “Ruach” with Rabbi Baruch Levine and Simcha Leiner. An uplifting end to a remarkable evening.

AUDIO-VISUAL PRESENTATION: AGUDATH ISRAEL: HERE FOR YOU, TOGETHER