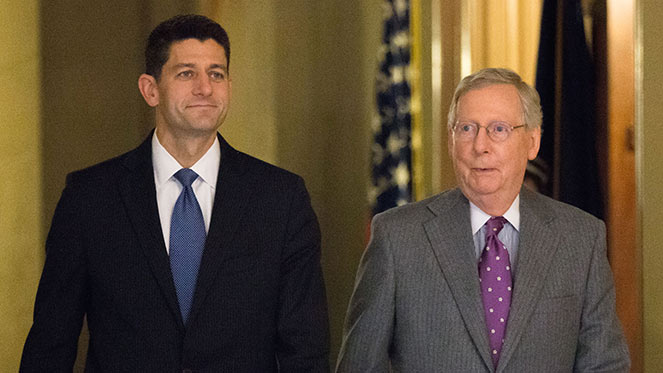 After Donald Trump’s wins in three out of Tuesday’s four contests, it is becoming more apparent that the day of reckoning for the Republican Party could come after the primaries on March 15. Right now, everyone can still hide behind the fact that Trump is not yet certain to be the Republican nominee, but that dodge is becoming more tenuous with every passing day. People of clear conscience are obviously struggling with the notion of being for Trump if he is our nominee — for reasons too numerous to list here — so what’s a good Republican to do? I suspect many people, like me, say they can’t see themselves supporting Trump, but what does what mean? Does it mean voting for Hillary Clinton in the general election? I’m certainly not there. How do you square voting for Trump with always putting country ahead of everything else, including the party?

Over the next few weeks, I think all eyes will turn to Speaker of the House Paul Ryan (R-Wisc.) and Senate Majority Leader Mitch McConnell (R-Ky.) for guidance. Will they voice support for Trump if he wins big next week? Will they continue to defer until the convention? Ryan and McConnell could bring Trump a lot of peace, but I’m not sure if Trump wants to reciprocate. And who could blame Ryan and McConnell if they have doubts about Trump’s loyalty and reliability?

It is satisfying for those of us who don’t see Trump’s appeal to recount all the latest instances of his buffoonery — including his cheesy display of Trump steaks, Trump water and Trump wine during his victory speech last night — but to do so is mostly pointless. As I’ve said before, he does not have any positive attributes, he just seems to have the most votes — and in an election, that’s what counts.

Another salient point that does not register with voters is how remarkably well Ohio Gov. John Kasich does in national head-to-head general election polling. According to the RealClearPolitics average, Kasich is polling more than seven points ahead of Hillary Clinton — the best of any of the Republican candidates — and comes the closest to beating Sen. Bernie Sanders (D-VT), lagging only half a point behind. Donald Trump, on the other hand, is the only Republican candidate who, according to those same polls, wouldn’t beat either Clinton or Sanders in a general election. Obviously, Kasich is someone that everyone could be proud of as their president. No Republican would be embarrassed with him as their nominee, and Republican candidates wouldn’t be adverse to sharing a platform with him in the general election. Still, he’s nowhere close to winning. You hear a lot of buzz about a Trump-Kasich ticket, but when I mentioned this prospect to close confidants of Kasich I got more than the standard denials — a lot more.

But here we are. Sooner or later it may come to pass that Ryan and McConnell will have to speak up, send a clear signal and supply the party faithful with a theme for the campaign and a rationale for what it means to have Donald Trump as the Republican nominee.

Rogers is a contributor to the PostPartisan blog, a political consultant and a veteran of the White House and several national campaigns. He is the chairman of the lobbying and communications firm BGR Group, which he founded with former Mississippi Gov. Haley Barbour in 1991.