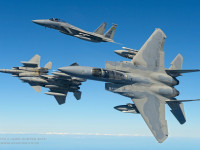 The US government is set to approve the sale of multi-billion dollar fighter jet packages to Qatar and Kuwait.

These two wealthy Sunni-Muslim gulf states have seen their weapons acquisition proposals stalled in Congress over the past two years. The Israeli government has used its influence to stall the sale of weapons to governments that are known state-sponsors of terrorism.

Israel’s complaints are not unfounded. In 2014 alone, Qatar pledged 400 million dollars to Hamas; a group that the United States has designated a terrorist organization.

The United States government has pledged to maintain Israel’s qualitative military edge in the region (QME). The sale of 36 F-15 fighters to Qatar and 24 F-18 Super Hornets to Kuwait, both of which are known state sponsors of terrorism, has Israel worried that the US will not uphold its commitments.

Israel is concerned about two aspects of the sale. One, is the danger that these pieces of advanced military equipment will fall into the wrong hands. This, in fact, occurred on the battlefields of Iraq. The US provided the Iraqi army with state-of-the art military equipment such as the M1 Abrams Main Battle Tank (MBT). When ISIS swept across the deserts of Iraq, and forced the US backed Iraqi army into retreat, they captured large amounts of US-made military hardware. In Israel’s view there is an inherent danger in introducing advanced military equipment into volatile regions of the world.

The other danger lies in the Obama administration’s change of strategy. The US government under Obama has aligned itself closer to the functioning state governments of the middle-east against extremism. This sale is part of that overall strategy. The US is seeking to shore up the Gulf States and normalize relations with Iran in an effort to counter ISIS and other extremist elements in the region. This strategy has Israel worried that the US is now less committed to maintaining Israel’s QME.

Israel is currently negotiating a ten-year aid package that will boost the $3 billion it receives annually by $1 to $2 billion. All of this is happening in the wake of the Iran deal; a deal that left many supporters of Israel disappointed. Many see the proposed rise in the aid package as a way for the US to make it up to Israel

Israel has already purchased 34 of these fighters, and plans to purchase17 more. The jets feature unprecedented technological advances such as advanced stealth capabilities. The stealth features of these jets make them invisible to radar.

Although the $100 million price tag on each of these jets has made purchase of large numbers difficult, the Israeli Air force has staked its future on the supremacy of these jets. The US believes that the F-35 will allow Israel to retain its QME as the conditions in the region continue to develop.