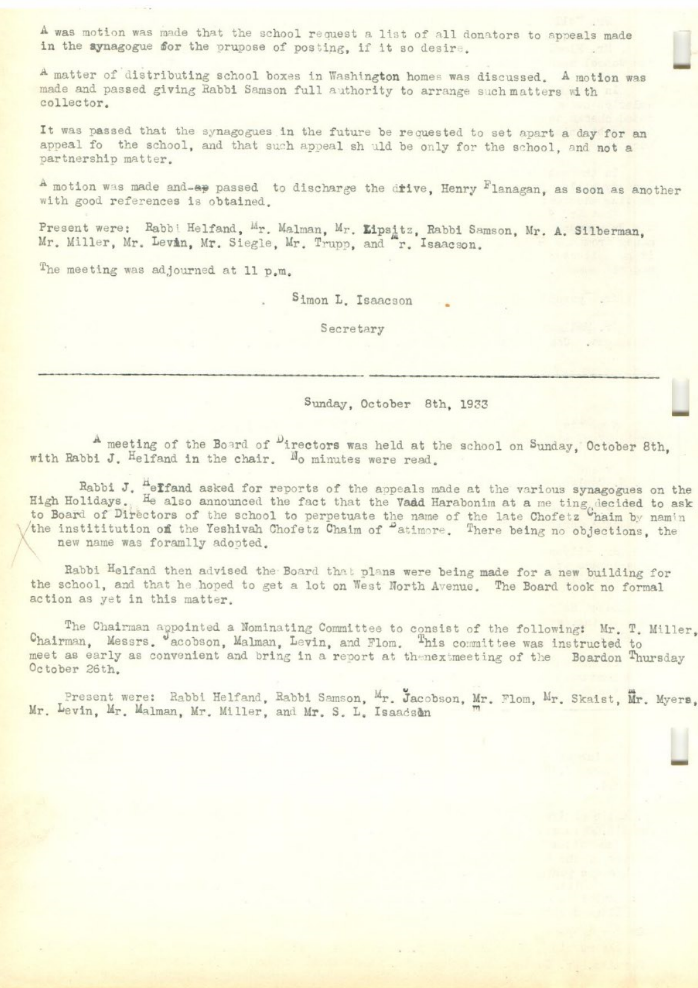 There is hardly a name that carries as much meaning to every Jew as that of Rav Yisrael Meir Kagan, the saintly Chofetz Chaim. Each of his many accomplishments would be legendary on its own; when combined, they are beyond our comprehension.

The Chofetz Chaim was niftar 83 years ago today, the 24 th of Elul. The first known dedication to his memory in America took place just a few weeks later. In a small room in Baltimore, Rabbi J. Heffland, the chairman of the Board of Directors of Talmudical Academy, which was founded in 1917, organized a meeting to discuss what could be done to preserve the legacy of the Chofetz Chaim. Rabbi Heffland suggested that they rename the Yeshiva and call it Yeshivas Chofetz Chaim of Baltimore. The resolution was unanimously accepted. (See the actual minutes of that meeting from 1933 attached to this article.)

Little did those at the meeting know the role that Yeshivas Chofetz Chaim — Talmudical Academy would play in the rebirth of Torah in America. Providence had it that this act of dedication to Torah would not only help build the community of Baltimore, but also spread Torah throughout the world. The Yeshiva endured the roaring 20’s, the Great Depression, the First World War, the Second World War, and more. Changes in society never affected the Yeshiva’s commitment to provide a Torah-true mesorah to its students, as a wide array of gedolim, askanim, and chashuvim made their way through the hallowed halls of the Yeshiva. For the Yeshiva continues to work toward the goals of its founding fathers: to serve only Hashem.

What better way to learn to appreciate the greatness of the Yeshiva than through the words of the Chofetz Chaim himself. The Chofetz Chaim spent nearly 30 years working on the Mishnah Berurah, his magnum opus. While working along with him on one particularly difficult passage, Rav Tzvi Hirsch Levinson, the Chofetz Chaim’s son-in- law, expressed his frustration to his father- in-law over the fact that they had worked for so long on clarifying this one challenging nuance, which would ultimately express itself through a mere four lines of the Mishnah Berurah. Rav Tzvi Hirsch lamented, “Rebbi, there will be thousands who learn through these few lines, yet they will have no idea how much time, effort, and energy we spent on these words.”

The Chofetz Chaim empathized with Rav Tzvi Hirsch and then shared the following story. A father and son were taken away to the frozen tundra of Siberia, where they were given the task of building roads. It was nearly impossible to break the ground, but they would work continuously, day after day. One day, the young boy asked his father, “Papa, thousands will travel these roads. Will any of them ever know how hard we worked on building these thoroughfares to enable them to travel on them?”

The father replied, “We don’t work for accolades or recognition; we work for one reason and one reason only: for Czar Papushka — the Czar, our father.”

The Chofetz Chaim explained, “Rav Tzvi Hirsch, we do not work for accolades or recognition. It makes no difference whether or not those who learn these lines will appreciate the effort that went into them. We work for one reason and one reason only; we work for the Aibeshter Papushka — the Al-mighty, our Father.”

The same can be said for the founders of Yeshivas Chofetz Chaim – TA of Baltimore, who built a Yeshiva for one reason and for one reason only: to bring honor and glory to the Al-mighty.

And now, Yeshivas Chofetz Chaim — Talmudical Academy of Baltimore is gearing up to celebrate its 100-year anniversary. This monumental milestone is rare. How many yeshivos can boast such a long and rich history on this country’s shores? At the same time, YCC-TA is in the process of expanding its campus to keep up with the growth of the community. As they celebrate their 100th year, this is a great opportunity for anyone who wants to have a share in this amazing institution, which is dedicated to the memory of the Chofetz Chaim.

We would also like to ask anyone who has any pictures, documents, or memories of the Yeshiva to please contact Rabbi Yechiel Spero at [email protected]. Rabbi Spero, the noted author and lecturer, is writing a book to be released in conjunction with the Yeshiva’s centennial dinner celebration.