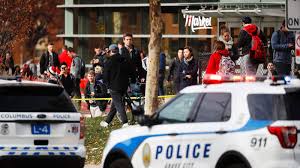 Vice President-elect Mike Pence is offering support to the families of a car-and-knife attack at Ohio State University.

Speaking to reporters at Trump Tower Monday night, Pence said, “Our hearts go out to the families of those affected in Ohio … a tragic attack.” He added that “our prayers are with them all.”

Eleven people were hurt in the attack Monday. A Somali-born university student plowed his car into a group of pedestrians on campus and then got out and began stabbing people with a butcher knife before he was shot to death by an officer. Police said they are investigating whether it was a terrorist attack.