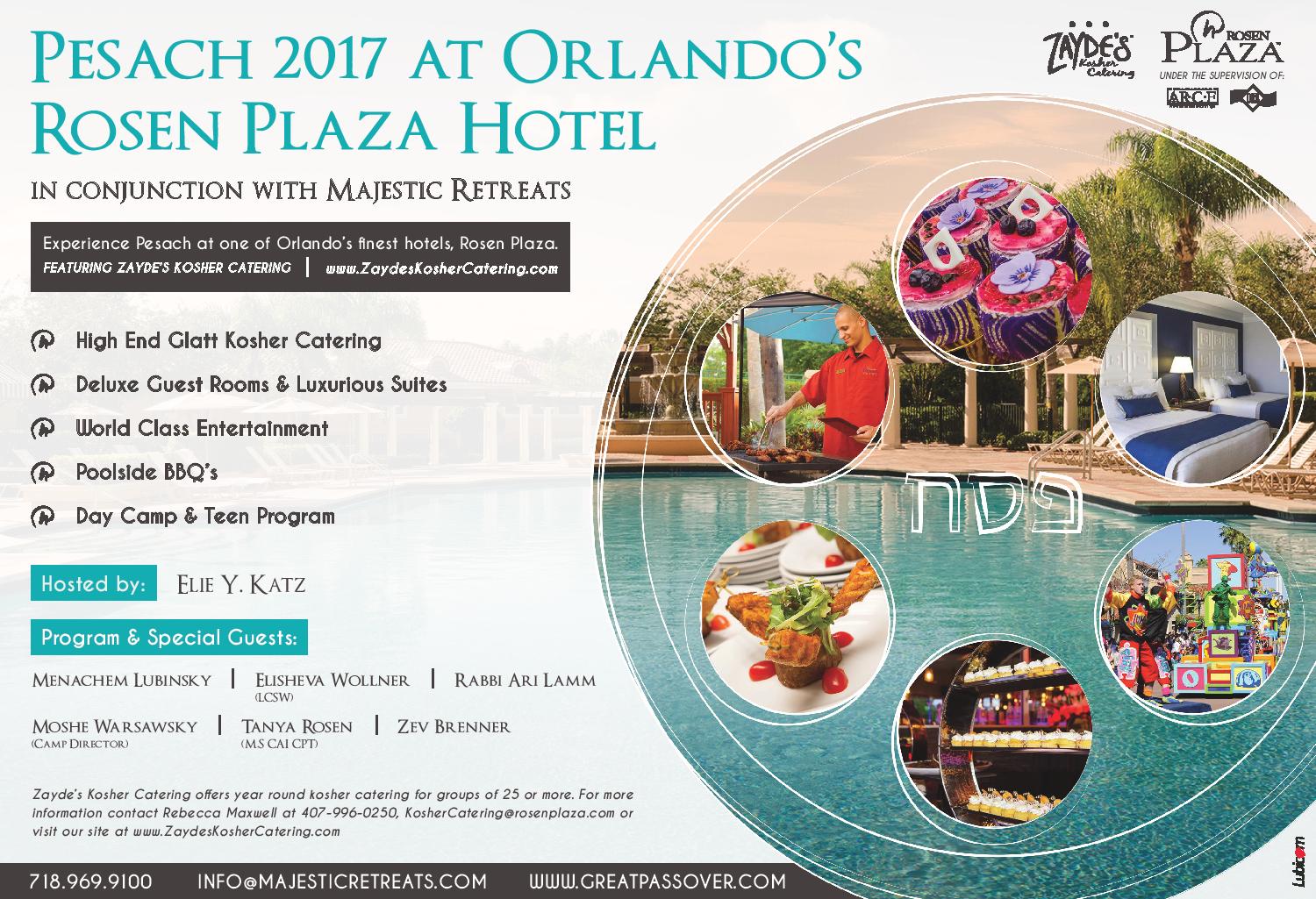 Orlando…Thousands of Passover vacationers are planning to once again spend the holiday in this city of many of the nation’s leading attractions. One of the major settings will be the magnificent Rosen Plaza Hotel which features Zayde’s Kosher Catering, the leading Glatt Kosher catering facility in Central Florida. The Passover 2017 program is being organized for the second year by Avi and Shneur Faskowitz of Majestic Retreats who have hosted Passover programs for the past 14 years, including their highly successful program at the Westin Fort Lauderdale Beach & Spa.

In 2016, the Rosen Hotel emerged as one of the leading venues for people looking for a Passover program that features world-class speakers and entertainment as well as haute cuisine by leading chefs, under the strict rabbinical supervision of both the Rabbinate of Central and North Florida (RCF) and the Orthodox Rabbinical Board (ORB) of Broward and Palm Beach Counties.

One of the keynote speakers will be Menachem Lubinsky, the recognized authority on the kosher food industry. He created and developed Kosherfest, the world’s largest and most successful kosher food trade show for the past 27 years. He is the president & CEO of LUBICOM Marketing Consulting and a leading marketing expert. Amongst his many activities is his role in preserving and developing HarHazeisim (Mt. of Olives) in Jerusalem. Other notable scholars on the program will include Rabbi Ari Lamm, the Resident Scholar at the Jewish Center on the Upper West Side, ElishevaWollner, who maintains private practices in Brooklyn and Cedarhurst treating children, adolescents and adults with eating disorders and other mental health issues. She received her Master Degree in Clinical Social Work from NYU. The host will be Elie Y. Katz, who has served the Teaneck, NJ community for many years as Mayor, Deputy Mayor, and Council Member, and now brings his leadership and service oriented experience to our Passover program as our Host.

Zayde’s Kosher Catering at the Rosen Plaza Hotel is under the year-round strict rabbinical supervision of both the Orthodox Union (OU) and the Rabbinical Council of Florida (RCF). This newest kosher enterprise is the brainchild of Harris Rosen, the founding President & CEO of the Rosen properties with its seven modern and beautiful facilities, two of which are adjacent to the Orange County Convention Center. Zayde’s is under the direction of Executive Chef Michael McMullen who has been with Rosen since 2006 and has a long-distinguished career in managing large-scale kitchens, including positions with the Westin and Hyatt Hotels, most notably the 5 Diamond- rated Hyatt Regency Grand Cypress.

According to the Orlando Tourist Bureau, “Our destination takes an extremely proactive role in education, prevention and monitoring for mosquito-borne illnesses. There have been no local, mosquito-borne transmissions of the Zika virus in Orlando.” They note that Orlando’s tourism corridors are some of the most frequently managed areas for mosquito control, “and we have had robust efforts in place for decades as part of enhancing our visitor experience.”

With no threat of Zika and three days of Chol Hamoed to visit some of the major attractions, Orlando and the Rosen Hotel are filling up rapidly. For reservations, please call: (718) 969-9100 or visit: www.greatpassover.com