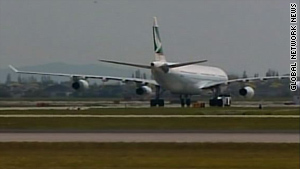 “A security issue raised on the ground in Vancouver meant extra security for the aircraft inbound to the airport and upon arrival,” Gus Whitcomb, a spokesman for Cathay Pacific, said in a statement. “We are not aware of any issues arising on board the aircraft itself.”

The security issue was a bomb threat that had been called in at 10:43 a.m. (1:43 p.m. ET), Cpl. Sherrdean Turley of the Royal Canadian Mounted Police told reporters outside the airport.

Passengers were deplaned and the aircraft was towed to another area for further inspection, she said.

Turley said law enforcement authorities determined there was no threat aboard the aircraft.

An investigation by the Royal Canadian Mounted Police is under way, Turley said.