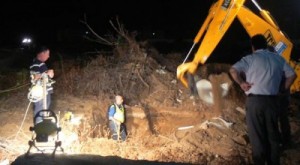 Amid threats of burning the city down, officials on motzei shabbos arrived to remove the bones found at the building site of the new Barzilai Hospital fortified emergency room, under heavy police guard.

YWN-ISRAEL reported that dozens of chareidim made their way from Yerushalayim to Ashkelon to spend shabbos to permit them to begin protests immediately on motzei shabbos, which they did.

While several dozen chareidim managed to evade police blockades on motzei shabbos, making their way to the site during the predawn hours, police moved swiftly and efficiently, removing them from the area and permitting Israel Antiquities Authority officials to continue their task, of removing the bones to clear the way to begin construction of the emergency room complex.

Hundreds of police were on hand at about 2:00am, protecting the 45 or so archaeologists and other experts operating at the scene along with a number of bulldozers and lighting crews, and in a well-orchestrated military operation, the work of relocating the controversial bones that have led to piskei halacha and protests got underway.

In Yerushalayim, chareidim protested on Bar Ilan and Yechezkel Streets, burning garbage cans and causing other property damage to express their outrage over the exhumation of the bones.

The process is expected to be completed within 36 hours and Asra Kadisha officials seemingly now understand that while they may or must protest, the operation will no longer be halted.