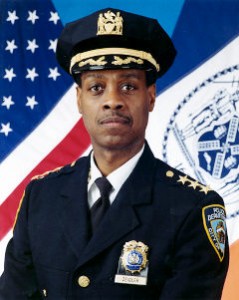 The city’s highest-ranking black cop is calling it quits: Community Affairs Chief Douglas Zeigler, 62, is retiring at the end of the month.

The 37-year veteran took over the Community Affairs Bureau in 2006 when it absorbed the School Safety Division.

“As a lawyer, Chief Zeigler brought the added dimension of legal training to his decision-making,” said Police Commissioner Raymond Kelly. “Community-police relations were never better than under his leadership.”

Zeigler, a three-star chief, sent a heartwarming text message to tell his troops about his pending departure that said: “Thank you for all your hard work.”

A replacement hasn’t been named, but various police fraternity groups urged Kelly to fill the post with another officer of color.

“We’re hoping the police commissioner identifies another person of color to fill that much-needed, sensitive position on his executive staff,” said Lt. Robert Gonzalez, president of the National Latino Officers Association of America.

Zeigler’s career was not without controversy. He was involved in a racially charged incident in 2008 in which two white cops ordered him out of his department-issued vehicle on a Queens street. Zeigler insisted he showed his NYPD identification but said the officers didn’t believe him.

The cops said he never let them know who he was.

“Don’t you know who I am?” he told them, sources said at the time.