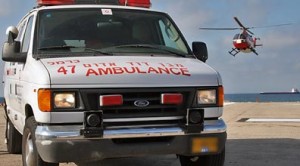 7:34AM IL: Three policemen were injured by terrorist gunfire near Beit Chaggai in the Southern Chevron Hills area early Monday morning. It appears the gunfire was directed at a police patrol vehicle. Additional information will be provided as it becomes available.

7:40AM IL: The attack occurred on the main north-south roadway, Route 60. It is unclear if the gunfire came from a stationary position or a passing vehicle. EMS and security forces are operating on the scene.

7:43AM IL: One of the policemen wounded in the shooting attack appears to be in serious condition according to reports from the first EMS responders at the scene.

7:49AM IL: One of the policemen is listed in serious condition, one moderate-to-serious and the third appears in moderate or moderate-to-light condition.

8:00AM IL: Two terrorists opened fire at a police vehicle using automatic weapons. At least one of the victims appears in very serious condition. A chopper is on the scene and the wounded will be transported to the trauma center of Soroka Medical Center in Beersheva or Hadassah Ein Kerem Hospital in Jerusalem.

8:10AM IL: Residents of the communities of Otniel and Beit Chaggai, in proximity to the shooting attack, have been instructed to remain in their homes. First response teams in those communities and the general area have been activated as the manhunt for the terrorists is underway. The wounded in the shooting attack, three policemen, are being transported to trauma centers by military chopper.

8:38AM IL: it is now being reported that four policemen were injured in the shooting attack near Beit Chaggai. Two of the policemen are listed in serious condition and the others light or light-to-moderate.

9:06AM IL: The manhunt for the terrorists responsible for the Monday morning shooting attack near Beit Chaggai continues, with IDF forces and Shin Bet agents operating in the area. Residents of area communities are still under instructions to remain indoors since the armed terrorists remain at large.

Gunfire rang out close to 7:20am, with terrorists targeting a police transport vehicle near el-Fuar Junction. It remains unclear at this time if the gunfire was from a stationary ambush position of a moving vehicle.

The two most seriously injured policemen were transported by chopper to the trauma unit of Hadassah Ein Kerem Hospital, where one is listed in critical condition. Dr. Yuval Weiss reports the policeman is in surgery and efforts continue to save his life. The other policeman is in moderate condition Dr. Weiss adds, and he is being treated in the trauma unit.

9:51AM IL: The policemen most seriously wounded by terrorist gunfire in the attack has died of his massive injuries as trauma physicians and surgeons at Hadassah Ein Kerem Hospital worked to save his life.