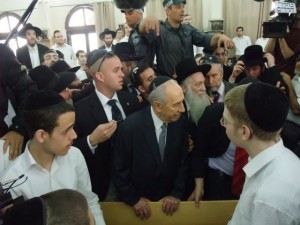 President Shimon Peres was scheduled to fly from Tel Aviv to South Korea on a Korean Air flight, but requested from Shin Bet officials that they approve another airline since the flight booked would have entailed chilul shabbos. The Shin Bet accommodated the presidential request.

It appears the President’s Residence made an official request to the airline to change its schedule, but the request was not accommodated, prompting the request to find a suitable airline that would permit the presidential entourage to travel without chilul shabbos.

When the president’s staff began travel arrangements, it was realized his return to Israel would be on shabbos afternoon. When efforts to accommodate the president’s schedule on Korean Air failed, the decision was made to find another airline.