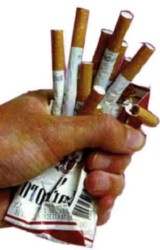 In an effort to raise revenue and get New Yorkers to quit smoking, lawmakers passed the new tobacco legislation that will raise taxes on cigarettes from $2.75 to $4.35.

With the $1.60 cent tax already in place, the tax will jump to $5.85 per pack in the city. The new law also authorizes the state to collect taxes on cigarettes from non-tribal customers on Native American lands.

Several Democrats opposed the bill but voted for it because it was attached to a budget bill that raises $440 million in revenue for the state.

Opponents say the law will set a bad precedent.

“It gives the governor the unprecedented power in this bill to settle a case without legislative approval, and not just settle any case but settle in a way that would change the law as it relates to Native American tax collection,” said Jose Luis Murillo, Jr. of the Altria Group.

“We’re a land of laws and today I think we’re taking a very important step in making sure those laws are being enforced and in the process get some very needed revenue,” said Senator Jeff Klein of the Bronx.