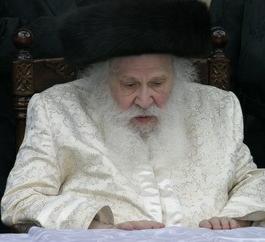 “The entire world today is compared to a boiling bubbling vat that only requires the slightest spark to ignite. At any moment, a world war may erupt chas v’sholom and only those who cling to Hashem and his Torah will merit surviving”, Kikar Shabbat quotes the Shomrei Emunim Rebbe Shlita as telling a number of businessmen who came to consult with him.

The Rebbe spoke with them for over an hour, referring to Torah education in Israel and its successes opposed to the general education, telling his visitors that educators explain to him that the nation’s education continues to decline. “Once upon a time, students feared and respected teachers and principals but today, the opposite is true R”L, the teachers and principals fear the students” the Rebbe added.

“We must make use of the time remaining and achieve as much torah learning and kiyum mitzvos possible until Moshiach’s arrival”.

The Rebbe also addressed the fact that the international community is turning against Israel. The Rebbe quoted the Abarbanel regarding the last days before the arrival of Moshiach, and that life in Eretz Yisrael is above the natural, the norm as perceived, which is proven by the number injured by Kassam rockets and the Gulf War.

The Rebbe was asked regarding the change in attitude of President of the United States Barak Obama towards Israel, responding “His downfall has already begun as we see with the oil crisis”.