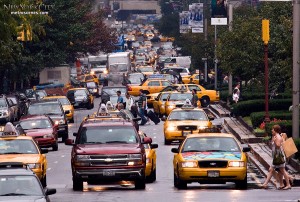 The city will embark on a massive long-term redesign of city streets to make busy intersections safer for pedestrians, Mayor Bloomberg is set to announce today.

The ambitious plan, a cornerstone of the Department of Transportation’s goal of cutting annual traffic fatalities in half from 274 to 137 by 2030, involves redesigning intersections, reducing speed limits and installing thousands of crosswalk countdown signals, among other innovations, officials said.

“We’re really changing the geography of New York City,” DOT Commissioner Janette Sadik-Khan told The Post. “You’re not going to be able to walk around New York City without seeing the improvements.”

Over the next year, the city will embark on a publicity campaign reminding drivers to slow down, while simultaneously experimenting with 20 mph speed limits in select neighborhoods.