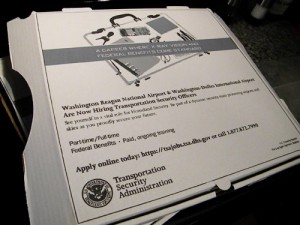 The Transportation Security Administration is trying a new tack to fill a slew of screener positions — advertising on pizza boxes.

“A Career Where X-Ray Vision and Federal Benefits Come Standard,” screams a TSA ad appearing on pizza boxes popping up across the Washington, D.C., region, The Washington Post reported Tuesday.

“See yourself in a vital role for Homeland Security,” plead the advertisements.

TSA spokesman Greg Soule said the method was intended to reach a “broader applicant pool.” He declined to say how much the agency was spending on the campaign.