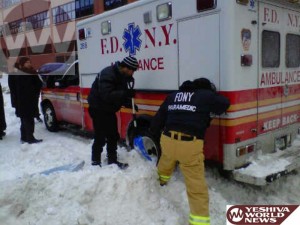 The hearings are underway:

Expect a flurry of criticism today as the City Council grills Mayor Michael Bloomberg’s administration in detail for the first time about its admittedly poor response to the Bloomberg-Blizzard.

The council will interrogate members of Bloomberg’s emergency command, the fire and sanitation departments and other officials about their reaction to the behemoth blizzard that dumped more than two feet of snow on parts of the city.

For example, who was in charge of coordinating the response? Was there a deliberate slowdown by sanitation crews peeved at the Bloomberg adminsitration for authorizing cuts and layoffs?

Many roads went unplowed for days, ambulances got stuck, and trash has piled up citywide ever since. At least two deaths — a 9-month-old infant and an elderly woman — have been attributed to the storm, as emergency personnel weren’t able to reach the victims in time.