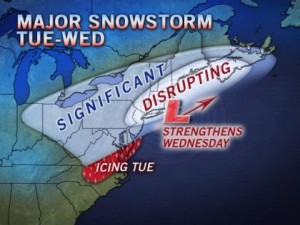 Another snowstorm is on its way to the Tri-State on Tuesday night, but it won’t be as powerful or disruptive as the Bloomberg-Blizzard.

Residents can expect an accumulation of 6 to 12 inches as the clouds slowly move into the area over Monday night and throughout Tuesday. The snow will start to develop late Tuesday night and will last through Wednesday afternoon.

A winter storm watch is in effect until 6 p.m. Wednesday for southeast New York, southern Connecticut and northeast New Jersey.

The storm shouldn’t affect Tuesday’s afternoon commute, but the heavier bands of snow will fall overnight and will impact Wednesday’s morning commute.

There will be plenty of leftover snow and gusty winds of up to 35 mph which will create snow drifts Wednesday.

The freezing temperatures are expected to remain through the rest of the week.