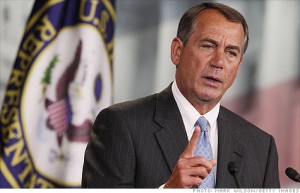 Two days before the deadline for a possible U.S. government default, President Barack Obama and congressional leaders reached agreement Sunday on a legislative package that would extend the federal debt ceiling while cutting spending and guaranteeing further deficit-reduction steps.

The proposed $3 trillion deal, which still requires congressional approval, brought some immediate relief to global markets closely watching the situation play out and a nation filled with anger and frustration over partisan political wrangling that threatened further economic harm to an already struggling recovery.

However, there was no guarantee the plan will win enough support to pass both chambers of Congress.

Democratic and Republican leaders in both the House and Senate were briefing their caucuses about the agreement on Sunday night or Monday.