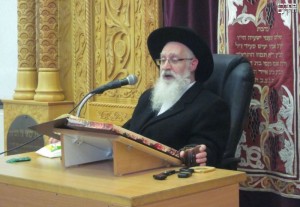 It appears tensions between Shas and Likud/Beitenu are continuing to increase as Rav Yaakov Chai Yosef released a statement that if one votes Likud in the general elections, one has transgressed an “isur D’oraissa”. During a weekly shiur, the rav had harsh words for frum and traditional voters planning to cast their ballot for Likud, stating such a move is simply prohibited, explaining this falls under ‘לפני עיוור לא תיתן מיכשול’.

Rabbi Yosef explained “Likud runs the country, including the Ministry of Education” and he blames them for the large number of youths R”L who simply do not know anything about Yiddishkheit, particularly due to Likud’s control over the nation’s public schools.

Regarding statements made by Bayit HaYehudi leader Naftali Bennett against refusing orders if it comes to removing Jews from their homes, Rabbi Yosef stated “One must refuse such orders, quoting a psak from HaGaon HaRav Avraham Kahane Shapira ZT”L. “Those soldiers who took part in removing Jews from Gush Katif brought the missiles to Gush Dan,” adding they will have to give a cheshbon in this world as well as the next.

“Netanyahu will not commit not to remove additional communities. It is most worrisome when he speaks against insubordination. Only a fool does not see Netanyahu plans to oust additional Jews from their homes. He is now working to persuade people to support him and anyone voting Likud has a hand in his transgression.”

Rabbi Yosef stated he is not involved in politics and will not tell people which party to vote for.