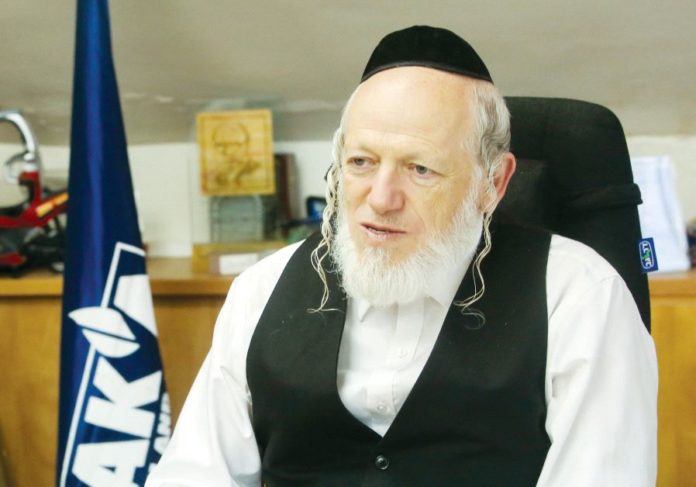 The following letter written by ZAKA founder and head Yehuda Meshi-Yahav to his late uncle, HaGaon HaRav Amram Blau ZT”L, leader of the Neturei Karta. It was published in Makor Rishon.

When I was young, I was a small soldier in the campaign, when I joined the demonstrations you were leading – whether it was every Saturday in demonstrations against Chilul Shabbos, or in the middle of the week against any other breach. You were for me the figure of the general, the leader, the fearless and uncompromising fighter for the principles of Judaism. I remember how we stood amazed each time anew by the blows you’d get lovingly from the police, or when you were arrested again and again. We grew up with your stories of heroism, such as putting your head in the Edison Cinema ticket window in Jerusalem to prevent chilul Shabbos, when you were beaten with clubs until you lost consciousness.

On your knees I grew up and was raised. From your mouth we have heard again and again about the great danger inherent in the Zionist state, to the extent that you have often asked to cross the border and to protect the shadow of the Kingdom of Jordan. We heard about the decrees of annihilation of the Zionist regime, whose sole purpose was to transfer the Jewish people to its religion and faith. We heard your warnings that within a few years there would be no remnant or refugee from the people of Israel. I remember from you that the Zionists are the greatest haters of the Jewish people in the world, worse than the Greeks who came to Israel, to destroy the people of Israel.

In your many sermons at public meetings, I was shocked by stories about various events during the campaign of destruction waged by the Zionist regime. “Cantonist decrees” you called them. You said that the Zionists are guilty of all the troubles of the people of Israel, including the terrible holocaust.

As I grew older, with the fervor of faith in your method and on your way, I was also involved in organizing demonstrations and protests. I was arrested countless times, and my bones were crushed by the beatings of the “Zionist soldiers.” But you have taught us that every red sign in the body from these blows is another level and a citation in the lofty ranks of “self-sacrifice,” and therefore we did not feel the pain either.

Today, after 70 years of a Zionist state, we are happy to inform you, my dear uncle, that your fears have been proven false: We have a wonderful Jewish-Zionist state that serves as a model for all the countries of the world, Education, health, immigrant absorption, and Judaism – about 7 million Jews – over fifty percent of the Jewish people – already live in the State of Israel, and in Jerusalem alone we are approaching one million residents, which is not certain even during the time of the Beis Hamikdash.

Who would have believed that 73 years after the terrible Holocaust, when the people of Israel were almost extinct, and there was hardly any trace of Torah and Chasidism, we would have a Jewish state of our own. The State of Israel. A state in which the world of Torah will reach a prosperity unparalleled in the history of the Jewish people. Since Melech Chizkiyahu, there has not been so much Torah study in the Land of Israel as it is today, and you will be surprised to hear who is the greatest Torah scholar in the world: the Zionist regime. Every year the Israeli government invests billions of shekels in the Torah world.

It is hard to believe that only 75 years ago, not hundreds of years ago, a Jew could not find a way out. No one wanted us. We were the lowest and most despicable people, we rolled between the death camps and the forests of Europe as animals in a daily struggle for survival. At the end of the terrible war, every refugee returned to his home, but the Jews were the only ones in the world who had nowhere to go, neither home nor country. Until the establishment of the State of Israel. Thousands of generations of Jews dreamed of a state, and here we have won what many did not. The State of Israel arose and was against all odds.

Rav Amram, the leader of Neturei Karta, see that in the Zionist state of destruction 73 percent of the citizens light Chanukah candles, 78 percent fast on Yom Kippur, and each year over 200,000 people take part in the last Slichos. How much you had to fight for every road and road in the ultra-Orthodox neighborhoods, to have them shut on Shabbos. Today it is hard to believe that even Meah Shearim Street and Kikar Shabbos were closed only after countless demonstrations that you led. On the 70th anniversary of the Zionist state, there are seven cities, headed by a chareidi representative, whose roads are hermetically closed on Shabbos and Yomim Tovim. In other cities, in neighborhoods where chareidim live, the closing of roads on Shabbos is taken for granted and you no longer have to fight for this.

The anthem of Neturei Karta, which we would sing loudly at the demonstrations, said that “we do not believe in the rule of the infidels, and we do not participate in their laws. We would get beaten up and even arrested, and we were sure that we were MeKadesh Shem Shomayim”. And here, in the Zionist state, the degree of “devotion” reached the highest place, such as who constitutes the symbol of self-sacrifice, the Divine Tanna Rabbi Akiva. Nearly 24,000 IDF soldiers were killed when they gave their lives for the sake of sanctifying G-d’s name and defending the State of Israel and the Jewish people.

The anthem of Neturei Karta, which we would sing loudly at the demonstrations, said that “we do not believe in the rule of the infidels”, if you knew what wonderful youth there is. Several times a year, thousands of youngsters raised in the Zionist state gather near the remnant of our Temple, swearing their willingness to sacrifice their lives for the sanctification of G-d in defending the homeland and the people of Israel. How many tears did I shed during this holy occasion when I saw my two sons enlisted, one for the Golani and the other for the paratroopers and swore like that. No one forced it on them. They did so of their own free will, which proves that there is no contradiction between Safra and Saifah.

“The state of Sodom and Gomorrah,” as you mentioned in your articles in the “HaChoma” of Neturei Karta the Zionist state. Then my uncle, Rabbi Amram, come hear what this state has, the world’s leading state in the number of charitable organizations that exist in it.

The first to offer help and assistance in every disaster in the world. A state that actually illustrates the concept of mutual responsibility, of “all of Israel are guarantors of one another.” The Zionist state is doing all it can to help any Jew wherever he is in times of trouble or distress, and sometimes even at risk of operations beyond imagination, such as Operation Yonatan. Not only that, but most of the great charitable organizations in the Zionist state were founded by chareidim: Yad Sarah, Ezer Mizion, the various Hatzalah organizations, ZAKA, and more, and these organizations are staffed by chareidim. The Zionist state has not yet managed to transfer the thousands of chareidim who head and mange these organizations to Shmad R”L, but rather U’Mekadshem Shem Shomayim in Israel and around the world.

In the state of relying on one’s own strength (ה”כוחי ועוצם ידי”), when there is a fear of drought, the Minister of Agriculture organizes a mass tefilla as the Kosel to be mispallel for rain. It is a country in which trumos and maasros are separated from 100 percent of its agricultural crops. A state that supports hundreds of millions of shekels for farmers observing shmitah.

If your generation rightly feared the Zionist state, 70 years later it was proven that the State of Israel, with the help of G-d, is the one that saves and protects the people of Israel, and it is the safest place – the best place to live as a Jew who observes Torah and mitzvos.