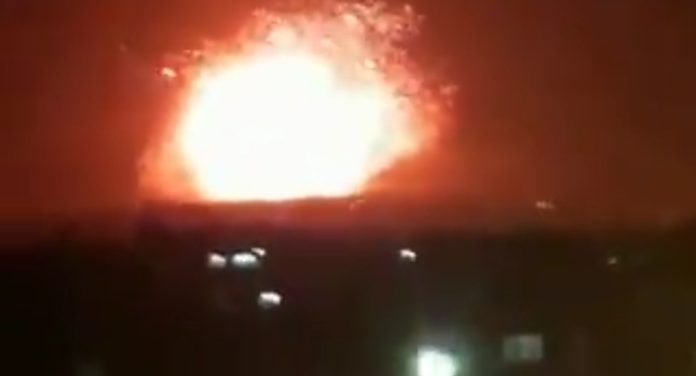 The state-run television reported early Monday that the missiles targeted military outposts in the Hama and Aleppo countryside. It did not say who fired the missiles or whether there were any casualties or damage.

According to the Orient news outlet, which is affiliated with the Syrian rebels, the blasts occurred in a base belonging to the Syrian army’s 47th Brigade, which is being used by Iran-backed Shiite militias.

Some on social media speculated that the alleged Iranian facility had been hit in an Israeli airstrike. As a rule, the Israeli Air Force does not comment on its activities abroad.

Shortly after the explosions, the European-Mediterranean Seismological Centre said the blasts caused a 2.6 magnitude earthquake in the area.

The Britain-based Syrian Observatory for Human Rights said missiles targeted a Syrian army base, west of Hama, where Iranian forces are also stationed.

Meanwhile according to unconfirmed Twitter reports, “dozens upon dozens” of Iranian soldiers were killed in the attack.

There are also widespread rumors of the recent landing of an Iranian transport plane at Hama Military Airport, possibly targeted in the attack, and reports that explosions were so big due to a direct hit on ammunition warehouses.

MORE: Explosion at military site in Syria was so powerful it registered as a 2.6-magnitude earthquake, several reported killed https://t.co/M76H2rbJEH

Earlier Sunday, Israeli Defense Minister Avigdor Lieberman stated that Israel would continue to maintain that it had freedom of operation in Syria, cited by Haaretz.

“We have no intention to attack Russia or to interfere in domestic Syrian issues,” Lieberman said at an annual Jerusalem Post conference. “But if somebody thinks that it is possible to launch missiles or to attack Israel or even our aircraft, no doubt we will respond and we will respond very forcefully.”

The news comes less than two weeks after a similar report of airstrikes on government military installations in the central Homs region and the suburbs of Damascus. But the military later said a false alarm had set off air defense systems.

Earlier this month, seven Iranian military personnel were killed in an airstrike on Syria’s T4 air base, also in Homs.

Syria, Iran and Russia blamed Israel for that attack. Israel did not confirm or deny it.

#Syria #Hama Photos from the Hama National Hospital As Civilians are donating blood for the Soldiers & Civilians who were wounded by the #Israeli #Israel Air Strikes tonight. pic.twitter.com/wDrk84Ykwj