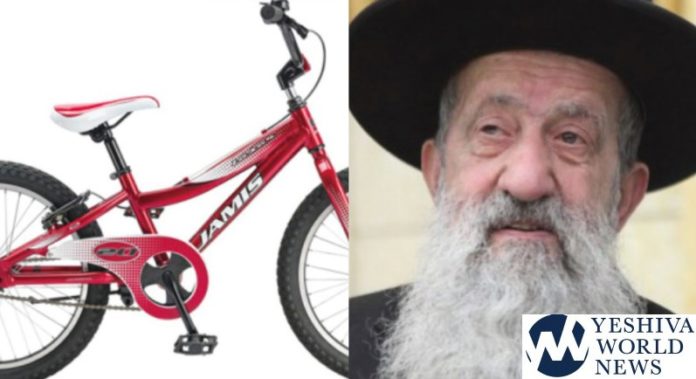 HaRav Bentzion Mutzafi, a prominent Sephardi posek in Eretz Yisrael, explained on Sunday, 27 Sivan that due to the many tragedies that have occurred, parents should not permit their children to play on bicycles.

The rav was recently asked by a talmid, who spoke of the 7-year-old boy from a Southern Hebron Hills community, who died as a result of a bicycle accident this past erev Shabbos.

In response, Rav Mutzafi said, “It is simply awful! Who said we did not spill this blood. A day does not pass without an incident involving a bicycle.”

At the end of his response, the rav told talmidim “Parents, do not give them bicycles. Have rachmanus on us”.

The psak does not make particular mention of electric bicycles and the small boy who died R”L was riding a regular, non-electric bicycle. Hence, it is believed the rav’s psak pertains to all bicycles.

HaGaon HaRav Yitzchak Zilberstein Shlita, the Rov of the Ramat Elchanan neighborhood of Bnei Brak and a member of the Degel Hatorah Moetzas Gedolei Hatorah, also released a psak. “Parents who give into children and buy them an electric bicycle are viewed as partners in murder and they will be liable for this if chalila something occurs”.

DEMS THREATEN TO PACK THE COURT! Some Dems, Not Yet Biden,...