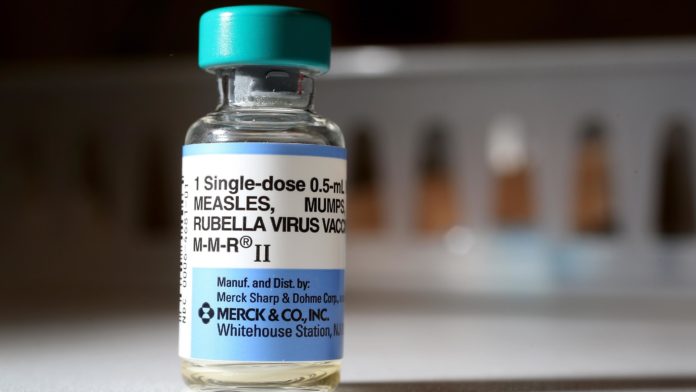 A guest who recently attended a Bnei Brak chasunah, a man in his 40s, is now admitted to Assuta Hospital in Ashdod, diagnosed with the measles. As a result, Health Ministry officials are concerned regarding the hundreds of guests who attended the same chasenuh, KAN 11 News reported on Wednesday evening the eve of 3 Marcheshvan.

The chasenuh in question took place on Sunday, 28 Tishrei, and according to estimates, during the incubation period of the disease – an average of one to ten days – he came into contact with hundreds of people and estimates the number of those who could be infected ranged from 500 to 1,000.

Following the discovery, the Ministry of Health worked to locate the people who had contact with him and to see if they were vaccinated against measles, and if not – to be immediately vaccinated. So far 50 people have been vaccinated and another 30 were waiting to be vaccinated on Thursday.

On Wednesday, two people who had contact with the patient arrived and were already diagnosed as infected. They too were hospitalized.

Earlier Monday, the Health Ministry announced that it had received a report that a measles patient flew on Wednesday on Israir flight, which took off at 13:55 from Eilat to Tel Aviv.

Passengers who develop fever or rash should inform their attending doctor that they have had contact with a measles patient. Pregnant women who were on flight, persons with immune system deficiencies or parents of infants up to the age of one year, are requested to contact the district health office in Jerusalem.

Since the beginning of the year, 623 patients have been diagnosed with measles in Israel, an increase of hundreds of percent compared to last year.

Earlier this week, YWN reported about the Menahel of Breslov Mosdos in Tzefas having been infected with the measles. He was listed in critical condition at the time of the news story.