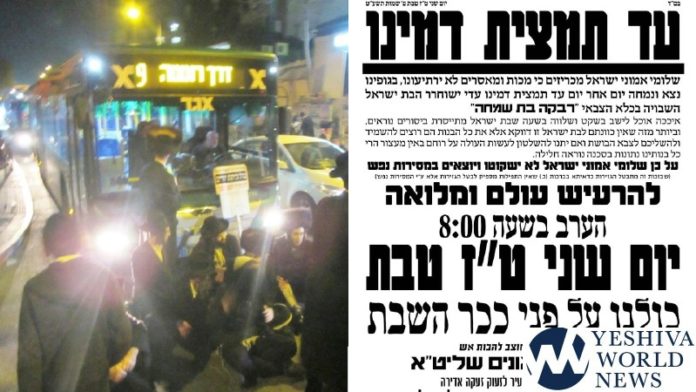 Chareidim identified with the Peleg Yerushalmi faction vow to continue protesting daily until a Chabad affiliated girl – Rivka Bas Simcha – being jailed by the IDF is released. The IDF want to draft her, but she refuses to cooperate, and as such, she has been jailed for a number of weeks.

A Monday night protest is being called for 8:00PM at Jerusalem’s Kikar Shabbos.

According to her mother, a tragedy struck the family number of years ago, and the young woman in question abandoned her frum lifestyle for a brief period, during which time she posted some photos on Facebook. Despite returning to her frum life and school, the IDF insists she is not Shomer Shabbos and insists on drafting her.

Protests were held on Sunday night in Jerusalem at the intersection of Yechezkel/Shmuel HaNavi Streets in Jerusalem as well as along Route 4 South from Morasha Interchange to the Givat Shmuel Interchange, causing major traffic problems.