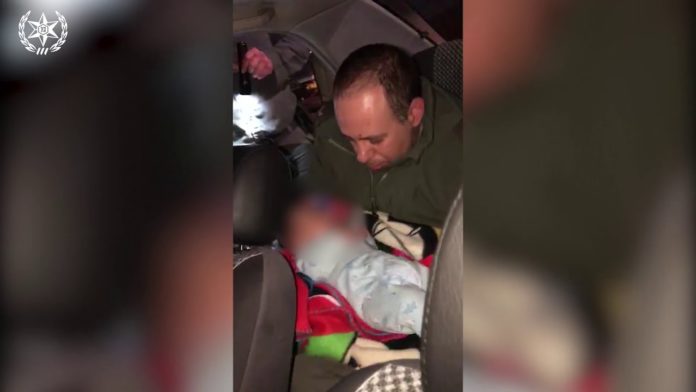 Border Police officers in the northern village of Kafr Manda in the Lower Galil, saved the life of a month-old toddler who lost consciousness after sustaining a head injury.

Israeli police have been operating in Kfar Manda in recent months following violent incidents that erupted against the backdrop of the local elections. The activities of the police officers are carried out to maintain public order, provide security and peace of mind, and of course arresting persons involved in the violent incidents.

At night, Border Police officers were operating in several areas in Kafr Manda. At approximately 1:30AM, a vehicle stopped near the police team. Two frightened parents, who held their infant son about a month-old and unconscious, reported that he had been dropped from their arms at home, sustaining a head injury.

The commander of the team, Sgt. First Class Tariq Ghanem, who was present, summoned an ambulance. Border police medic Zuhair Hazimeh, arrived within a short period of time and began performing a preliminary exam of the infant while providing respiratory assistance until an ambulance arrived. The infant was evacuated by ambulance to the English Hospital in Nazareth and was hospitalized, with his condition reported to be non-serious.

“Our job as police is to protect the public and save lives. I was glad that my activities and my teammates saved the baby’s life,” said the medic Zuhair when he received the message from the hospital, that the infant was remaining in the hospital for observation.