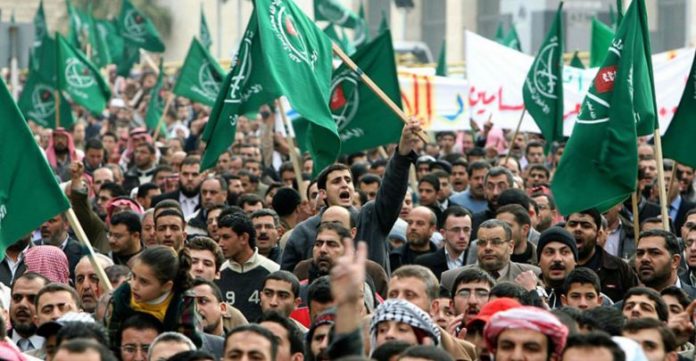 President Donald Trump and his national security team are weighing whether to designate the Muslim Brotherhood a foreign terrorist organization, the White House said Tuesday.

White House press secretary Sarah Sanders said Trump was consulting with his advisers and leaders in the region who share his concern about the Islamist movement with followers across the Middle East. “This designation is working its way through the internal process,” she said.

The New York Times first reported on Tuesday that the administration was pushing to designate the group, but the idea is not new. Some people think the Muslim Brotherhood does not meet the legal criteria required for the designation. Others think the organization is too diverse and spread out across nations, making it difficult to enforce a one-size-fits-all description. There also questions about whether a designation would complicate U.S. diplomacy.

The group was founded in Egypt in the late 1920s and now operates in many countries. Egypt’s President Abdel-Fattah el-Sissi came to power in 2014 after removing his predecessor, Mohammed Morsi, who came from the Muslim Brotherhood. Egypt has since outlawed the group and has encouraged the U.S. to follow suit.

To meet the legal criteria for the designation, a group must engage in terrorist activity that threatens the security of Americans or the defense, foreign relations or economic interests of the United States.

Jonathan Schanzer, with the Foundation for Defense of Democracies, a Washington think tank, said some violent branches of the group could be designated, but other members support its extremist political views but not violence.

That “blurry” picture of the group was what discouraged earlier U.S. administrations from designating it, he said. The Muslim Brotherhood in Libya, Syria and Yemen have apparent ties to militants, while the group in Jordan bills itself as a political group, said Schanzer, who advises against a “blanket terrorist designation” of the group.

Some national security legal experts conclude that the Muslim Brotherhood is too diffuse to designate. They say elements of the group are violent and could continue to be designated, but that, as a whole, it does not create a terrorist threat to the United States.

Enforcing such a designation could be difficult.

Schanzer said intelligence on group members that Jordan or Egypt share with the U.S., for example, could likely be tainted by their desire to weaken political opposition from Islamists in their countries. Designating the Muslim Brotherhood as a terrorist group also could further strain U.S. relations with Turkey.

The political party of Turkish President Recep Tayyip Erdogan is an offshoot of the Muslim Brotherhood. U.S.-Turkey relations are at an impasse over Ankara’s decision to purchase the Russian S-400 missile system.

Asked by reporters at the White House whether there were any concerns that designating the Muslim Brotherhood could create diplomatic complications for the administration because the group is so widespread, Trump adviser Kellyanne Conway replied: “No.”

Daniel Benjamin, former counterterrorism coordinator at the State Department, said the department looked into designating the Muslim Brotherhood as a terrorist organization in 2017 and 2018 and concluded that there was no legal basis for a designation.

“That continues to be true,” tweeted Benjamin, who is now at Dartmouth College. He accused the Trump administration of “warping” the designation process for political reasons. “It’s malpractice and ultimately dangerous,” Benjamin said in his tweet.