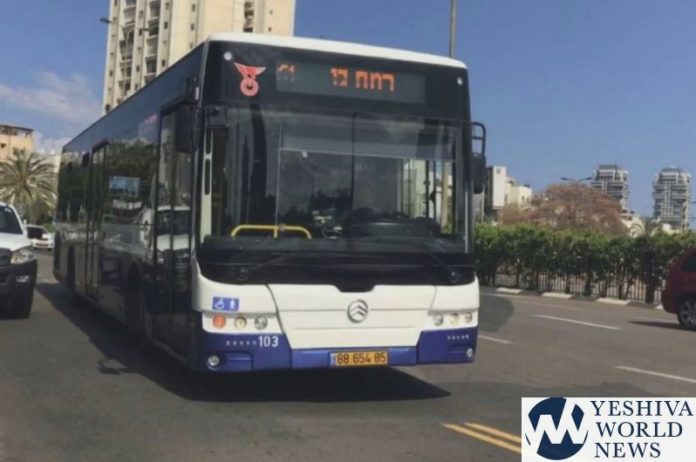 As expected, the Ramat Gan City Council has given the green light to begin bus service on Shabbos R”L. The vote passed by a 15-6 margin, permitting the launch of the Shabbos shuttle service, which is expected to operate on main thoroughfares in the city beginning on Friday, July 19, 2019. Yahadut Hatorah officials Moshe Gafne and Yaakov Litzman stated the council’s approving the move represents crossing a red line.

In line with the decision, two lines will operate on major vehicular thoroughfares, transporting people to entertainment venues and the beach beginning on Friday, July 19, 2019. The chareidim responded harshly over the decided sharp escalation in Chilul Shabbos in the city.

During the council session, Mayor Carmel Shema HaCohen explained it is a matter of conscience and therefore, all members of the coalition are not bound by coalition discipline but are free to vote as they please. “We argued! From now on, we are all beloved brothers and respect one another. Am Yisrael is first and foremost dependent on achdus”, stated Mayor HaCohen.

The first line will from Kiryat Krinitzi in the east of the city and the second from the Park HaLeumi parking lot, running only on main streets to pick up passengers at existing bus stops. The buses will not enter neighborhoods and the buses will not stop near areas viewed as sensitive to the religious community in the city to avoid compromising the Shabbos atmosphere.

“The character of the city cannot be tested under short term events. I have no doubt that Ramat Gan is on the path of being better for all, both religious and secular. Only understanding and the elimination of coercion will make everyone better here and it will cease to be a zero-sum game where one’s interest can be achieved at the expense of another”, the mayor added.

Yahadut Hatorah responded angrily, with Deputy Minister Yaakov Litzman and MK Moshe Gafne, who chairs the Knesset Finance Committee stating the vote represents crossing a red line for “selfish reasons”. They released the following statement: “Something occurred in Israel to our disgrace and embarrassment. The city of Ramat Gan made a disgraceful and shameful move to approve public transportation on Shabbos and Yomtov, while harming the status quo which has been in place for years, ignoring the feelings of tens of thousands of residents of the city who are shomrei mitzvos, and committed to Jewish tradition”.

They also lamented the recent statement released by Knesset Speaker Yuli Edelstein, in which he declared the mayors of cities and municipalities, together with their councils, should be permitted to decide the character of Shabbos in their communities.

Yahadut Hatorah states the party will work against the decision, towards reversing it since it is clearly a violation of the religious status quo.

On the other hand, there are some who applauded the vote, including Yisrael Beitenu party chairman, MK Avigdor Lieberman. “I congratulate the city of Ramat Gan on the decision to permit public transportation on Shabbos. It is done with the correct dosage of consideration. I hope that other municipalities will also go in this direction”.