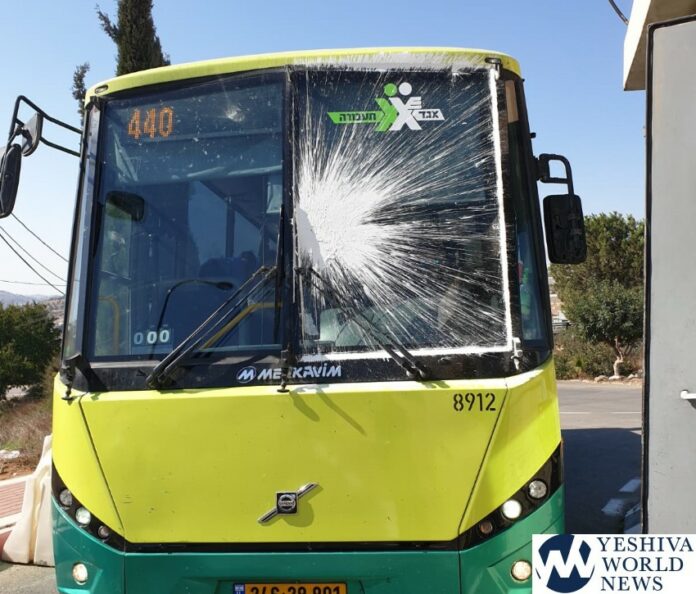 It may seem as a prank or a non-serious attack to some, as Palestinians on Monday afternoon targeted an Egged bus traveling near el-Fuar in the Southern Hebron Hills area, targeting it with a bag of paint.

The attacker was accurate as the paint blocked the driver’s vision, hoping that it will lead to the bus crashing. However, B’chasdei Hashem, the driver was able to bring the bus to a safe stop and there were no injuries.

Earlier in the day, as rock-throwing attacks against Israeli vehicles continued, a force of Givati Brigade soldiers entered the Palestinian area of el-Aroub in search of the attackers.

Also earlier in the day, there were rock-throwing attacks and tires set on fire on Route 44 near Azzoun. Palestinian flags were also flown.

While there were reports of property damage to vehicles, B’chasdei Hashem, there were no injuries reported.

In yet another act of Palestinian terror, a large storage facility for straw was set ablaze by Palestinians on Monday. B’chasdei Hashem, no injuries but the significant damage is evident to all.

Rock-throwing attacks were also reported on Route 60 in the Binyamin Regional Council area north of Yishuv Ofra. B”H there were no injuries but once again, vehicles were damaged.

In the video below, furnished by the Arab media, a person who was throwing rocks in the area between Kiryat Arba and Hebron was hit in his abdomen by a rubber-coated bullet fired by security forces trying to restore order. The Arab media reports he was killed, pronounced dead after being transported to a PA (Palestinian Authority) hospital in Hebron.

In the next video, more rock-throwing attacks on Monday, November 11, 2019, north of Hebron from Halhul. IDF soldiers are seen after entering the PA area in search of the attackers. There were no injuries in the attacks. Vehicles were damaged.