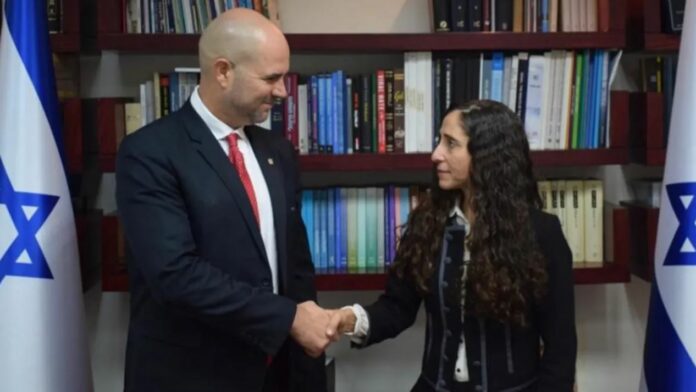 Justice Minister Amir Ohana announced on Tuesday morning that he is appointing Orli Ben-Ari Ginzburg as the interim state prosecutor to replace Shai Nitzan, whose term ended on December 15.

“I decided that Attorney Orli Ben-Ari Ginzburg, Central District deputy prosecutor, will serve as the interim state prosecutor. Orli has been serving in the State Prosecutor’s Office for 28 years in a number of positions. She has vast experience in the criminal and security fields, is a graduate of the Institute for National Security Studies (INSS), has a master’s in national security and two law degrees. She voluntarily serves as the head of the National Disciplinary Tribunal of Discipline of the Israel Bar Association, and has served for years as the head of the State Prosecutor’s Security Forum.”

Ohana’s decision was in opposition to Attorney General Avichai Mandelblit’s opinion, who said that only one person on Ohana’s list of five candidates had enough experience for the position – Deputy State Attorney for Criminal Matters Shlomo Lemberger – adding that under normal political circumstances, he himself would head the committee to select a candidate. Mandelblit also told close associates that he will fight against appointing any candidate whom he feels is unsuitable and will appeal to the Supreme Court if necessary.

Ohana’s appointment may be the beginning of a battle of wills between the justice minister and Mandelblit, a relationship that is already fraught with tension due to Ohana’s strong support of Netanyahu, who was recently indicted by Mandelblit on charges of fraud, bribery and breach of trust.

Despite Ben-Ari Ginzburg’s qualifications, a Calcalist report noted that since she’s only a deputy prosecutor rather than a prosecutor, it’s like a brigadier general being appointed as the IDF chief of staff, adding that it’s not surprising that Ohana didn’t choose Lemberger, who supported the indictments against Netanyahu.

“Let’s not be naive” Sasson continued. “If the justice minister appoints a person contrary to the attorney general’s position, he does so deliberately to sabotage the work of the State Prosecutor’s Office.”

Transportation Minister Bezalel Smotrich had a different opinion, writing on Twitter when the controversy was first publicized: “I call on the justice minister to refuse to give in to the unlawful, immoral, unjust and undemocratic dictates of the attorney general and to appoint whomever he feels is most suitable as the acting replacement for the state prosecutor. If the Supreme Court freezes or revokes the appointment then there won’t be a state prosecutor.”

Later on Tuesday, Mandelblit sent a sharply worded letter to Ohana, stating: “This appointment is extremely unreasonable and therefore there is a legal impediment to it.”

Civil Service Commissioner Prof. Daniel Hershkowitz also objected to the appointment, and wrote a letter to Ohana, stating: “Her appointment may undermine the proper functioning of the State Prosecutor’s Office,” because she “does not belong to the senior echelon of the organizational hierarchy.”

Hershkowitz wrote that Ben-Ari Ginzburg does meet the threshold conditions for the position, but he feels that “the position should be assigned to the most senior civil servant in the State Prosecutor’s Office with the agreement of the attorney general, due to the unique characteristics of the position and consideration of the benefit of the system.”