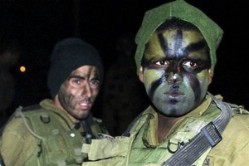 The IDF Spokesman reports that 20 soldiers have been injured since the ground incursion began at 7:00pm on motzei Shabbos with two in serious condition and two light. The seriously injured were transported to Tel Hashomer Hospital in Tel Aviv.

IDF officials are pleased with the pace of the operation and all reports indicate soldiers are well-prepared and the aggressive offensive against Gaza is progressing as hoped.

The UN Security Council did not reach a resolution after convening in emergency session, prompted by Israel’s infantry incursion into Gaza. The United States blocked a Libyan resolution demanding an immediate ceasefire.

During the night, rockets landed in the Eshkol and Shar HaNegev regions. Baruch Hashem, no injuries.

IMPORTANT NOTE: YWN offers three different options (all free, of course) for keeping in touch with the news as it happens. Should you wish to receive breaking updates via SMS text message (in the USA), or two different email alert options, please click HERE to sign up – and join the already tens of thousands of subscribers.