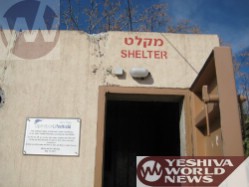 VIDEO & PHOTO LINKS BELOW: HEART (Hatzolah Emergency Ambulance Response Team) Team members accompanied by the YWN news team on Tuesday paid a visit to the Sderot Hesder Yeshiva, headed by Rabbi Dov Fendel, a veteran Sderot resident who arrived long before the Kassams, and is confident that he and his talmidim will remain long after the rockets are a thing of the past.

Rav Fendel, a delicately-framed individual, seems as confident in his prediction for a better tomorrow as he is in his unshakable faith that Am Yisrael will continue to endure until the current situation passes. He has taken his yeshiva from a humble 60 students 15 years ago to the thriving Torah institute that it is today, with construction visible in every direction, literally, including dormitory facilities which will provide students with protection against attacks without leaving their rooms. Each ‘unit’, which costs $36,000 to construct, providing lodging for students and includes a bathroom, shower, and garden. Five dormitory buildings are under construction and the first one will be ready in the coming weeks.

The talmidim in the Beis Medresh sent a clear message to all members of the HEART Team, that the attacks will not interrupt Torah study in this southern town. The bochrim were unaware of anything taking place around them, buried in their gemaras and indulged in the day’s learning schedule.

Perhaps the most moving scene was the senior citizen’s kollel which Rav Fendel began a number of years ago. One elderly gentleman, Amos Hasson explained that instead of “wasting time at home, he and his friends come to learn thanks to Rav Fendel”. Amos explained the rav sees to all their needs, physical as well as spiritual, and it was abundantly clear the yeshiva serves as a hub for a growing number of community residents, who are especially anxious during this wartime period.

Amos is equally firm in his trust in HaKadosh Baruch Hu, explaining he arrived in Sderot in 1952, was married in 1956, and has never left. He proudly explained his children have also remained, all living near the yeshiva. Amos is firm in his commitment to continue learning here, seemingly undisturbed by the harsh realities taking place outside the hallow walls of the yeshiva. Amos could not stop showering the HEART Team members with words of praise, for their willingness to pick up and leave their homes to come to Eretz Yisrael to give the people in the south a chizuk. The visitors on the other hand were overly impressed by the genuine humility of this special senior citizen, who was truly unable to understand why all the fuss – after all, he was just sitting down with friends and learning, nothing more.

Actually, Amos is just a regular fellow after one begins meeting the talmidim of Rav Fendel. The rabbis, a mild-mannered son of American parents who relocated to Eretz Yisrael a number of years ago, seems to infect everyone around him with his profound love of Eretz Yisrael, Am Yisrael and Toras Yisrael, packaged neatly in a bundle called the Sderot Hesder Yeshiva.

“It’s about chinuch, torah, and chessed. It is not about Kassams. We were here before the rockets and we will be here long after they are gone,” explained the rav. He pointed out that prior to the rockets, they had a quaint campus, constructed primarily of caravan homes, but the realities of constant rocket threats over the past eight years have compelled them to leave their corrugated home and move into permanent cement reinforced structures that over more than a modicum of protection against the realities of neighboring Hamas-controlled Gaza. This has becoming especially poignant following the implementation of the Israel government’s Disengagement Plan in 2005. sadly, the doomsday prophets of then are the “I told you so” folks of today, lamenting what they knew would be Israel’s new realities, rockets following the Gaza refugees into Ashkelon, Ashdod and even Yavne. Nevertheless, the reality forced upon the yeshiva the rabbi explains ensures the yeshiva will be there forever, now boasting fortified cement walls which proudly encase the torah study that engulfs the entire campus area.

From the roof of the new three-story beis medrash, one can see the ruins of the former Jewish communities of Gaza to the west, as well as Chevron to the east. Perhaps the message is lost to some, but the HEART Team members who quickly digested the irony of the location, the view and the growth of the yeshiva, which by some accounts; defy the natural trend of an area that has endured so much in the past years.

Rav Fendel does not work in the yeshiva, but it is his life’s mission, passionately explaining to his visitors that “it’s about learning and living torah and Eretz Yisrael.” He explains that the students learn what it means to be a torah observant Jew, a Jew who understands the meaning of fighting in the IDF when called upon to do so, and to sit in beis medresh to give the spiritual backbone to those out in the combat field. The two are essential elements in the formula of building Eretz Yisrael he explains as well as reaching out to the community with kiruv, warmth, and love, extending a hand of understanding and assistance during times of need.

Quite honestly, one does not need to see the splitting of the Red Sea to witness miracles. Sderot residents will tell you that “Hashem is out there, every day, all the time” and this is a matter of fact in this southern city. Take Yaakov Dahan for example, who we find in the supermarket located across the street from the yeshiva.

It did not take Yaakov more than a few moments to realize the members of the HEART Team were planning to spend a sizable sum of money in his store, purchasing cases of goods to bring to soldiers on the front, the team’s next stop. The local purchase is another mitzvah, bringing badly-needed commerce to the rocket-stricken city. Despite this, despite the financial hardships, Yaakov insisted on sharing his personal miracle with the group before the shopping began. This was perhaps even more important to him, to spread the word of Hashem’s open miracles in the city.

The story took place on erev Shavuos last year, with Rav Fendel confirming that Yaakov approached him, insisting he send students to the shul for a hachnosas sefer torah, a ceremony to usher a new torah into his shul. Rav Fendel explained the hazards of holding such an event at the time, with rockets falling in all directions, but for Yaakov, the enemy was not about to dictate when a new torah can be brought to Sderot.

The event was held in the presence of some 300 people, and Baruch Hashem, as Yaakov explained, the rockets were not about to cancel such an auspicious event.

As they were cleaning up in a side room, a rocket slammed into the shul and the damage was significant. Yaakov explained that while the event was painful and frightening, all the people who were still there were in a side room and there were no injuries. Now that HEART Team members fully understood what really makes Sderot tick, they were permitted to shop for soldiers.

Dvir took us to the nearby home of a rav in the yeshiva, whose home was hit by a rocket. The rav’s torah library was literally burned and badly damaged, with many seforim destroyed. Damage to some of the home was significant, but he was learning in the yeshiva earlier in the week when the rocket hit, and his family and others present escaped physical injury or worse. The holes in the home’s cement exterior, shattered windows, and charred walls provide the group with testimony of what could have been, but as Dvir explained, once again, Hashem reached out and pulled them to safety.

A fifth year hesder student, Dvir Hudefi, was assigned to ride the bus with the visiting delegation as the Rav was compelled to return to his talmidim. Dvir is also a combat officer in the Givati Brigade and less than a year ago completed the combat term in his hesder program, and was now back to full time limud torah (torah study). He explained to me that he and his colleagues were compelled to keep the limud torah going, to increase tefillos and do what they can to protect their friends now serving in Gaza.

As the visit to this special yeshiva was wrapping up, the rosh yeshiva came to deliver a final point or two. He explained “the terrorists are trying to make this a ghost town, but they will never succeed. It is about Emes (Truth) he explained as well as Torah and Sderot,” expounding “the yeshiva is expanding and planting torah roots in other southern communities such as Kiryat Gat and neighboring kibbutzim.”

“Torah, the IDF, chessed and the community,” are what it is about explained the rabbi, who stated the Sderot Hesder Yeshiva feels an obligation to the greater southern communities, to spread the message of faith and a Torah way of life.

It is not just about torah and learning, but responding to the needs of the community. With the increase in rocket attacks, the emergency medical response system became overloaded and Rav Fendel’s students responded by signing up for MDA training courses. An ambulance is now stationed at the yeshiva, and there are now 11 medics and 14 certified ambulance drivers. This permits an immediate response and given the city’s EMS a badly-needed boost. Students also volunteer for the Mishmar Ezrachi auxiliary police, civil guard and Zaka.

“We are the Neturei Karta on the front lines of learning,” he added, speaking of the institution’s “strong, proud and determined spirit of the IDF prepatory yeshivas and hesder yeshivas” which are preparing the next generation of Torah scholars, observant Jews and soldiers.

At the end of the visit, it was obvious the members of the HEART Team were strengthened in what they heard and saw first hand, realizing there is a special spirit coming out of Sderot, a special torah Jew, and a special commitment that assures the city the future is closer than some may realize, but for Rav Fendel and his students, it about a much bigger picture than the present, but one of merging Am Yisrael’s past into the future, which in Sderot, is being molded one talmid at a time.

Rav Fendel made a passionate appeal for communities to please undertake one dormitory unit, at the cost of $36,000. Anyone wishing to assist is urged to contact the yeshiva:

If you would like to learn more about Yeshivat Hesder of Sderot or schedule a visit to the Yeshiva, please contact the Yeshiva office at 972-8-661-1360 or email [email protected].