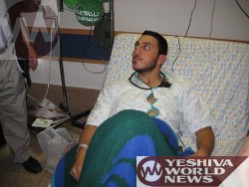 On to the real mission – visiting the wounded soldiers: VIDEO & PHOTO LINKS BELOW:

Emotions run high in the hallways of Soroka Hospital in Be’er Sheva, as soldiers, friends, and family members are moving about, some saying tehillim, others nervously speaking on their cellular telephones and some just staring, perhaps waiting for a miracle, a kind word, and encouraging report from a member of a medical team or a friendly touch on the shoulder perhaps.

Our first stop is a critically wounded soldier, Li’el Hoshea [ben Miriam] Cohen, a Golani Brigade combatant who sustained a life-threatening head injury in one of last week’s mistaken fire incidents. Li’el, 22, is married to Chagit for the past 16 months, and they live in Kibbutz Masu’ot Yitzchak in the southern region. Chagit bravely forces a smile to welcome the well-intentioned visitors, obviously preoccupied with the condition of her gravely-wounded husband.

Meeting us was Effie, his father, who exhibited a light, a gentle yet powerful sparkle emerged from his eyes, eyes that were obviously tired from shedding many a tear during recent days, but eyes filled with hope and prayer, expressing much emotion even before he began speaking with us. Sporting a facial stubble that testified to his round-the-clock vigil at Li’el’s side, Effie’s words spoke volumes regarding his faith in HaKadosh Baruch Hu, far exceeding the obvious statement made by his kippa. For Effie and his wife Miriam, the message was simple but potent, “please, get everyone to recite tehillim and daven for our son. We need Am Yisroel’s tefillos so he can heal.”

They are quite realistic as to the seriousness of his condition, but equally as serious and realistic regarding their realization of the power of prayer. While [for technical reasons] we were unable to transfer a short video clip from Li’el’s phone to share with readers, seeing it left me speechless, as the soldiers, kibbutznikim and religious, with yarmulkes (kippot) and without, new immigrants and veteran Israelis, from all walks of life, danced with a fervor as they prepared for their mission in Gaza, singing “Anachnu Ma’aminim bnei Ma’aminim”. Effie continues to watch the brief clip taken shortly before Li’el and his buddies entered Gaza, perhaps drawing strength from its message during these difficult hours and days, waiting in the hospital for a good word, a sign of encouragement, a sign that Li’el will get out of bed one day and dance again.

Li’el was attending 12th grade in his native Tirat HaCarmel when he met Chagit, a sheirut leumi volunteer, and the rest is history. Effie explained that after graduating high school, Li’el would not enter into Golani directly, explaining that he must first strengthen himself spiritually, attending the Ateret Kohanim Yeshiva IDF preparatory program, and after a year of torah study, only then declaring himself “suitable” for the mission of entering the army and serving Am Yisrael.

“The gemara (Talmud) teaches us that the parents are the tree and the children are the fruit of the tree. In this case, the fruit is much better than the tree,” explained Effie in a statement from the heart, incapable of expressing his boundless love and respect for his son.

The family also requests that everyone daven for a dear friend of Li’el’s, also in Soroka, in a different unit, Neriya ben Rivka, who they explain is also in need of tefillos as a result of his injuries sustained in Gaza.

Kfir Brigade soldier Ohr Elgozi ben Rachel [Biderman] Baruch Hashem was in much better condition, alert and oriented and anxious to speak to the YWN camera. His parents were genuinely touched when they realized the visitors traveled from the United States to be at his bedside, realizing the importance of showing solidarity at this critical time. Like his colleagues on the various military bases and installations visited by the HEART Team, Ohr thanked us for coming, praised us for giving support, not exactly certain what all the fuss was about, for as you see, from his perspective, he and his buddies are only doing their jobs.

NOTE: Communication devices supplied for YWN for use on this mission by http://www.travelcell.com/tcap.asp?ag=YWN